The newly elected Executive officers of the Nigeria Union of Journalists, NUJ, Anambra State Council, led by its Chairman, Dr Emeka Odogwu, has paid a courtesy visit to the Anambra State Commissioner for Information and Public Enlightenment, Mr C-Don Adinuba at the Jerome Udorji Secretariat complex, in Awka.

Correspondent, Joseph Egbeocha reports that while addressing the delegation, Mr Adinuba thanked God and NUJ members for a free and fair election that produced the new set of Executive, describing it as a great lesson for Nigerians and Nigerian politicians in the quest for free and fair elections in the country.

Mr Adinuba, who praised the cooperation among NUJ members; even after the election, as well as the assurance to work as partners for the development of Anambra State, noted that Anambra State Government has never protested against any Journalist over any news report, describing it as testament of Governor Willie Obiano’s kind disposition to journalists in the State, even as he stated that Anambra is growing in new phase, unlike other States, and requested support of Journalists in achieving set goals, including the vision 2070 by the Obiano administration.

Earlier in his remark, the new Anambra NUJ Chairman, Dr Odogwu, who reassured of his team’s commitment to lead NUJ in the State to new heights, thanked the Commissioner for supporting free and fair NUJ election, even as he called for more partnership and continued support of the Commissioner to the union, even beyond his stay in government. 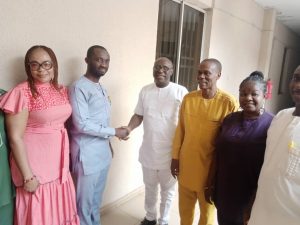 Contributing, the Chairman of State Information Chapel of the NUJ, Dr Stanley Onunkwor, who recalled how Dr Odogwu facilitated the Anambra NUJ Secretariat built by Mr. Godwin Ezemo, expressed the hope that the new leadership will reinvigorate NUJ in the State for the good of all.