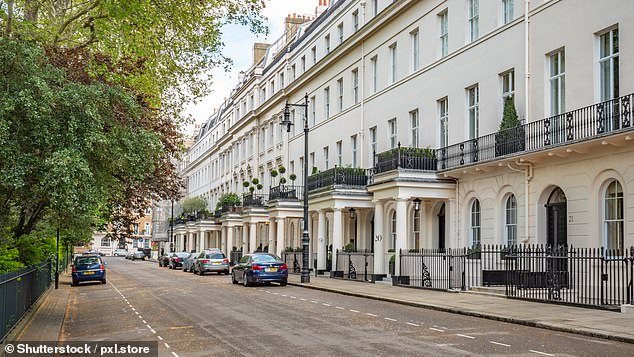 Oligarch mansions bought with ‘dirty money’ in the wealthiest parts of London could be seized and transformed into affordable housing as part of a new crackdown on money laundering.

Westminster city council is examining the use of compulsory purchase orders if it finds properties in areas including Belgravia, Knightsbridge and Mayfair have been acquired with ill-gotten wealth or ‘money of a dubious origin’.

Russians accused of corruption or links to the Kremlin have brought houses worth nearly £430million in Westminster since 2016, according to Transparency International. This is more than any other council area in Britain.

Westminster currently has a waiting list for affordable housing of 4,000 households. There is no suggestion any of these properties were bought with dirty money

The Labour-run council is currently examining the use of a compulsory purchase order against a property registered in the Seychelles after the owner fell behind on their council tax, the Guardian reported.

However, the authority faces major obstacles including a dearth of transparency over property ownership and a lack of checks on companies registered at Companies House.

Britain has been accused of becoming a ‘global hub for money laundering’, with an estimated £1.5 billion worth of property in the country bought by Russians facing allegations of corruption or with ties to the Kremlin.

Much of the property is held by companies registered to Britain’s overseas territories and crown dependencies, according to data uncovered by Transparency International, The Times reported in February.

But Transparency International director Duncan Hames warned these figures were only the ‘tip of the iceberg’ and said laws that force overseas companies holding property in the UK to reveal their owners was ‘long overdue’.

Campaign group Transparency International also found 2,189 companies registered in the UK that have been linked to 48 money-laundering and corruption cases.

At least 28 per cent of the property linked to corruption is located in Westminster and is worth nearly £430 million, with a further 20 per cent in Kensington and Chelsea, 10 per cent in both Camden and Wokingham in Berkshire, while another seven percent was located in the City of London.

Westminster – which currently has a waiting list for affordable housing of 4,000 households – said it was comparing properties owned overseas with council tax data to work out whether they were being used for their stated purpose.

The council defines dirty money as that obtained from criminal activity, bribery or the misuse of public money, while money of dubious origin is usually associated with the use of tax havens or the elaborate use of shell companies.

Council leader, Cllr Adam Hug, said: ‘Westminster’s dirty secret has been known for many years but those in power looked the other way for too long as money of questionable origin flooding into London and investors took advantage of our relatively lax laws.’

‘It took the war in Ukraine to refocus attention on oligarch investments and what London has become in terms of a European laundromat for dirty money.

‘But the problem goes wider than Putin and his henchman to many others who see Belgravia, Knightsbridge, Mayfair and other parts of Westminster as places to rinse their money.

‘This not only damages the reputation of our city by supporting authoritarianism abroad but drains the vitality of areas with empty or under-used homes.’

Cllr Hug is calling on the government to carry out a series of changes to make it easier to clamp down on money laundering, including tightening checks on property owners.

‘Companies House does not have the powers or resources to address those who set up opaque shell companies to launder and export money from London,’ he said.

‘There are more background checks required to get a local authority lending card then to set up a company in the UK.

‘We want to work with Government Ministers and agencies to crack down on dirty money and ensure agencies like HMRC and the National Crime Agency are properly resourced.’

Meanwhile, the authority has seen a rise of 1,200 per cent in the number of properties registered to owners in Russia. There is no suggestion any of these properties were bought with dirty money

His other recommendations include increasing the fee to register a company at Companies House from £12 to £50 and introducing more rigorous identity checks.

A total of 30 stores are currently under investigation for business rates evasion of around £8m.

A common feature in these investigations has been the use of opaque shell company structures to avoid identifying the genuine owners and so frustrating attempts by the council to take offenders to court.