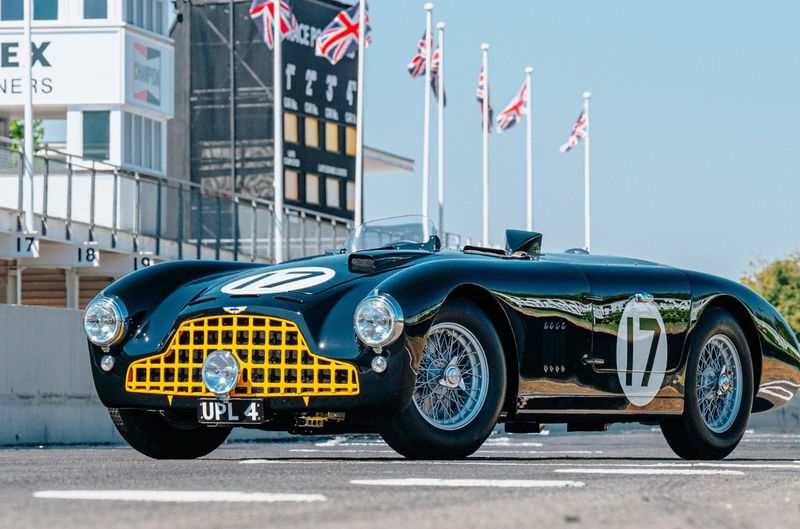 Northamptonshire: 22nd September 2022: The 2022 Bonhams Goodwood Revival sale concluded with some surprising results and a sell-through rate of 67%. Here are the lots that caught the eye of Hagerty’s UK Price Guide Editor, John Mayhead.

Sold for £3200 (+premium)
The Revival sale offered over two hundred high-quality automobilia lots, and this group of official race cards and programmes from 1934 to 1939 races at Brooklands was a nice group in fair condition. These tend to change hands for between £60 and £100 a copy, but the bidding quickly exceeded the top estimate. Hagerty has seen a rise in memorabilia values in recent years, nevertheless, this was an unexpected result.

Sold for £93,150
Testarossa values have risen sharply in the most recent update to the Hagerty Price Guide. This car was a straight Condition 3 ‘fair’ car, a little stone-chipped around the edges, with vinyl peeling from the dash and rust on the wheel hubs and it sold for pretty much spot-on the Hagerty value. But this was a car with a lot going for it: right-hand drive with early ‘monospecchio’ mirror and single-nut wheels, it has recently been recommissioned with receipts for £20,000 of work in 2020.

Sold for £687,000 (inclusive of premium)
Hagerty has been watching the Mercedes-Benz SLR McLaren very closely in recent months. In collectability terms it has a huge amount going for it: the right badges on the bonnet, F1 DNA, stunning looks, and the Midas touch of a Gordon Murray design. The estimate on this seemed very low given current prices and this was a fantastic example: delivery mileage with a colour combination of Crystal Fayalite Green over Silver Arrow leather. The estimate may have been tempered by the additional 20% VAT and 10% import duty that any UK buyer would have to pay, but it didn’t put off bidders, and the sale price of £687,000 was a statement of this car’s collectability.

Sold for £69,000 (inclusive of premium)
The Ferrari 365 GT4 and later 400/412 iterations have turned a corner in the last few years. The boxy four-seater was once looked-down upon but recently the attraction of a V12 Colombo engine, a practical four-seat interior and wedge styling suddenly seemed to dawn on many buyers. This car looked great, a superb colour, presenting very well and with a Ferrari Classiche certificate. Being a 365, it has a manual gearbox and is a rare right-hand drive car.  At just over the Hagerty Price Guide ‘Excellent’ value, this seems like a great buy.

Sold for £614,200 (inclusive of premium)
This little Porsche 904 was formerly part of the Petitjean Collection and on static display for 27 years, it is a very pretty car and eligible for all sorts of historic competitions. This one has been fitted with a 911 six-cylinder engine and looks like it needs a little fettling to make it ready to race but the hammer price close to Hagerty’s Condition 4 value of £557,000 seemed like a fair price. These cars should be worth more.

Sold for £597,400 (inclusive of premium)
Sunbeam entered three works cars in the 1922 Strasbourg Grand Prix, one of the first post-war races to take place. One caught fire during testing, so the spare car was drafted in. Drivers Kenelm Lee Guinness, Henry Seagrave and Jean Chassagne did what they could with the car, but the engine proved to be fragile, and the Sunbeam couldn’t challenge the dominant Fiats. This lot is one of those cars and has been the subject of a great deal of recent research. Sunbeam were not clear with their chassis numbering on the entry sheet, so proving which car was which has been difficult.

However, the catalogue identified this as the spare/ prototype car that took place in the race. One of the other team cars sold in 2009 for £493,500 and this estimate seemed fair, but the bidding didn’t rise and the hammer fell some way short of the low estimate.

Sold for £117,300 (inclusive of premium)
An original example of MG’s preeminent 1930s racer with no stories is now worth well over £500,000 so a very detailed replica, complete with ENV pre-select gearbox and is an attractive proposition. This car presented as a new car and lacked any feeling of history but that didn’t put off the bidders and it sold for well over top estimate. Hopefully it will now see some use and gain the odd battle scar.

Not sold
The star lot of the Bonhams Revival sale received a great deal of interest on viewing day. With a fantastic combination of race history and current restored condition, it looked great in dark green paint and contrasting yellow grille. A period Mille Miglia entry and winner of the Goodwood 9 Hours race, Bonhams were keen for this car to sell and estimated at about a third of the price of a DB3S, this seemed like a good buy. The money wasn’t in the room though and bidding stalled at £2,300,000. That was a surprise.

Sold for £911,000 (inclusive of premium)
‘Refer to department’ meant that Bonhams had no real idea of how this lot would be perceived by the bidders. A bent, battered, and rusty frame, a seized engine and a few bits of running gear made an interesting sight mounted on a plinth in the Bonhams tent, but the photo behind showed why: this was the first sports-racing car to wear the Bruce McLaren Motor Racing Team badge and raced at Goodwood in the RAC Tourist Trophy Race.

Even before it was bought by McLaren, it had a number of race wins under its belt, driven by Roger Penske. After years laying in a South American farm, it was recently returned to the UK. The story really hit home with bidders who rapidly pushed up the price and the sale price of £911,000 drew fully justified applause. Hagerty suspects that we’ll see this car again, fully restored, and on the Goodwood grid before too long.

Sold for £59,800 (inclusive of premium)
Only 18 HSR Chevettes are believed to exist of the original 33 built, and this one looked to be in good condition with a respray around eight years ago still holding up. A rare ‘homologation special’ the plaid interior made a fantastic contrast to the silver, box-arched body and bidders really liked it. The sale price, just under the top estimate and over the Hagerty Price Guide ‘Excellent’ value, was still surprising.

Stand to win a Formula 1 trip of a lifetime and up to R300,000 with Betway. Predict the result of each Grand Prix in our 4 To Flag promotion. Add your predictions to a betslip and enter our end-of-season draw. You could be jetting off to watch F1 live.

Posted by Hagerty International on Newspress

If you enjoy motoring auctions, let us know in the comments if you want to see more and follow our other articles here.