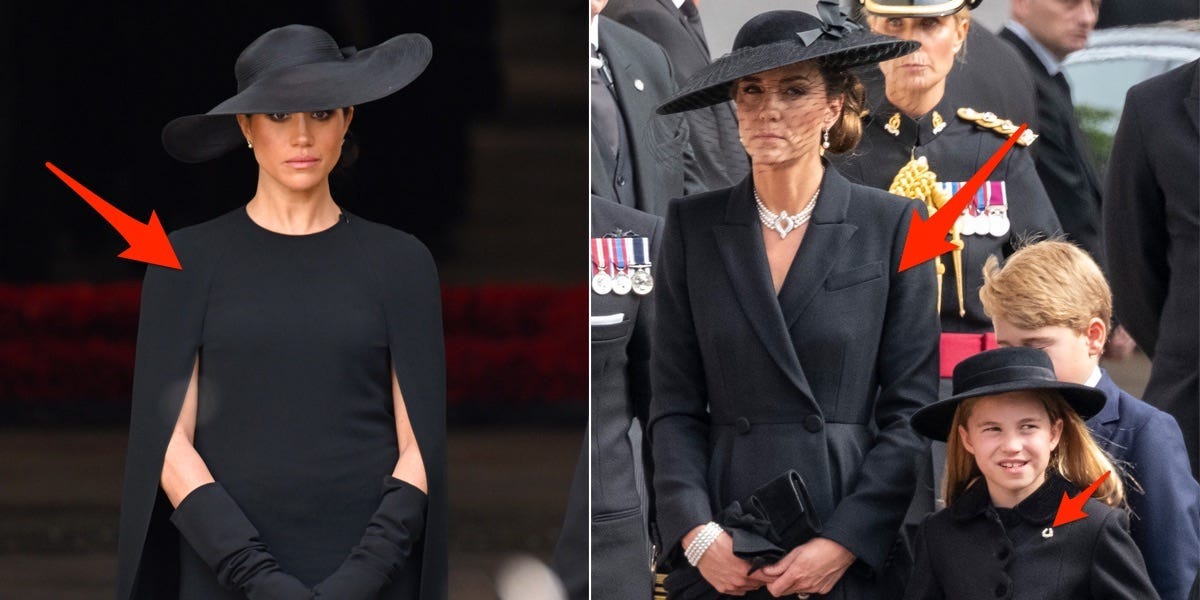 Kate Middleton’s dress for Queen Elizabeth II’s funeral was a black version of a dress she has worn before.

At the Trooping the Colour in June 2022 to celebrate Queen Elizabeth’s birthday, Kate wore a white Alexander McQueen coatdress that cinched at the waist with two buttons.

To pay homage to her relationship with the Queen, Kate wore the same dress in black to her funeral.

The dresses were identical aside from the color. Kate paired the black look with a coordinating hat that had a veil.

Kate also paid tribute to the Queen with a necklace.

She wore the Queen’s Four-Row Japanese Pearl Choker to her funeral, which is made of pearls and diamonds.

Kate previously wore the necklace to Prince Philip’s funeral. Princess Diana also wore it in 1982, so the piece nodded to Kate’s new role as the Princess of Wales as well.

The Princess of Wales’ pearl earrings also belonged to the Queen.

According to Glamour, Kate wore the late monarch’s Bahrain pearl drop earrings, which coordinated with her necklace.

The princess wore her hair up, allowing the earrings to shine.

Like her sister-in-law, Meghan Markle’s dress nodded to the Queen.

Meghan arrived at the funeral in a black cape dress designed by Stella McCartney, which she paired with black gloves, a black hat, black shoes, and black pantyhose.

The Duchess of Sussex previously wore the navy version of the cape dress to Queen Elizabeth II’s 92nd birthday celebration in 2018.

Meghan’s earrings were a gift from the Queen.

Like Kate, Meghan wore earrings that once belonged to the Queen to her funeral.

The Queen gave Meghan the diamond and pearl earrings after she and Prince Harry announced their engagement in 2018.

Charlotte paired her ensemble, which looked like a miniature version of her mom’s outfit, with a horseshoe-shaped, diamond brooch that paid tribute to the Queen’s lifelong love of horses.

According to People, the Queen gave the brooch to her great-granddaughter before her death.

The military uniform William wore to the funeral included a subtle tribute to his grandmother.

The Prince of Wales wore his Royal Air Force uniform to the funeral, which included an “ER” pin on the right shoulder.

It stands for Elizabeth Regina, which means Queen Elizabeth in Latin, as Insider previously reported.

Camilla, Queen Consort, nodded to Queen Elizabeth with a brooch that once belonged to Queen Victoria.

The heart-shaped brooch features three sapphires and the number 60 in recognition of Queen Victoria’s diamond jubilee in 1897, as Vogue reported.

Queen Elizabeth II, who was Queen Victoria’s great-great-granddaughter, ruled for 70 years and marked her platinum jubilee in February, surpassing Queen Victoria’s 63 years on the throne, as Insider previously reported.

Sophie, the Countess of Wessex, included an homage to the Queen’s favorite flower on her dress.

London shared on Instagram that she embroidered Lily of the Valley flowers into the gown, as they were the late monarch’s favorite flower.

Sophie wore a custom hat made by the milliner Jane Taylor, according to People.

Taylor told People the straw riding hat was designed to honor the Queen’s love of horses, and the flowers accenting the brim were modeled after the ones included in the monarch’s wedding bouquet.

As Insider previously reported, 18-year-old Lady Louise, who is Prince Edward and Sophie’s daughter, shared a love of horses with her grandmother.

She paid tribute to their bond at the funeral with a horse pendant necklace.