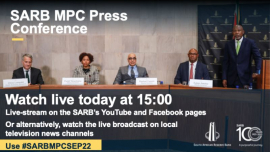 The MPC made the decision during its meeting on Wednesday. This was the fifth consecutive increment following a two 25 basis points hike in November and in January. The repo rate was hiked by 50 basis points at the May meeting. The MPC upped the ante, with a 75 basis point rise at its July meeting.

The level of the repurchase rate is now closer to the level prevailing before the start of the COVID-19 pandemic in 2020.

Kganyago said the revised repurchase rate path remains supportive of credit demand in the near term, while raising rates to levels more consistent with the current view of inflation risks.

“The aim of policy is to anchor inflation expectations more firmly around the mid-point of the target band, and to increase confidence of hitting the inflation target in 2024,” he said.

Guiding inflation back towards the mid-point of the target band, said Kganyago, “can reduce the economic costs of high inflation and enable lower interest rates in the future”.

“Achieving a prudent public debt level, increasing the supply of energy, moderating administered price inflation and keeping wage growth in line with productivity gains would enhance the effectiveness of monetary policy and its transmission to the broader economy.”

The Governor said economic and financial conditions are expected to remain more volatile for the foreseeable future.

“In this uncertain environment, monetary policy decisions will continue to be data dependent and sensitive to the balance of risks to the outlook. The MPC will seek to look through temporary price shocks and focus on potential second round effects and the risks of de-anchoring inflation expectations. The Bank will continue to closely monitor funding markets for stress.”