Skip to content
Home » News » Royal mail: ‘I wrote to Queen Elizabeth in 1947 and this was her reply to me 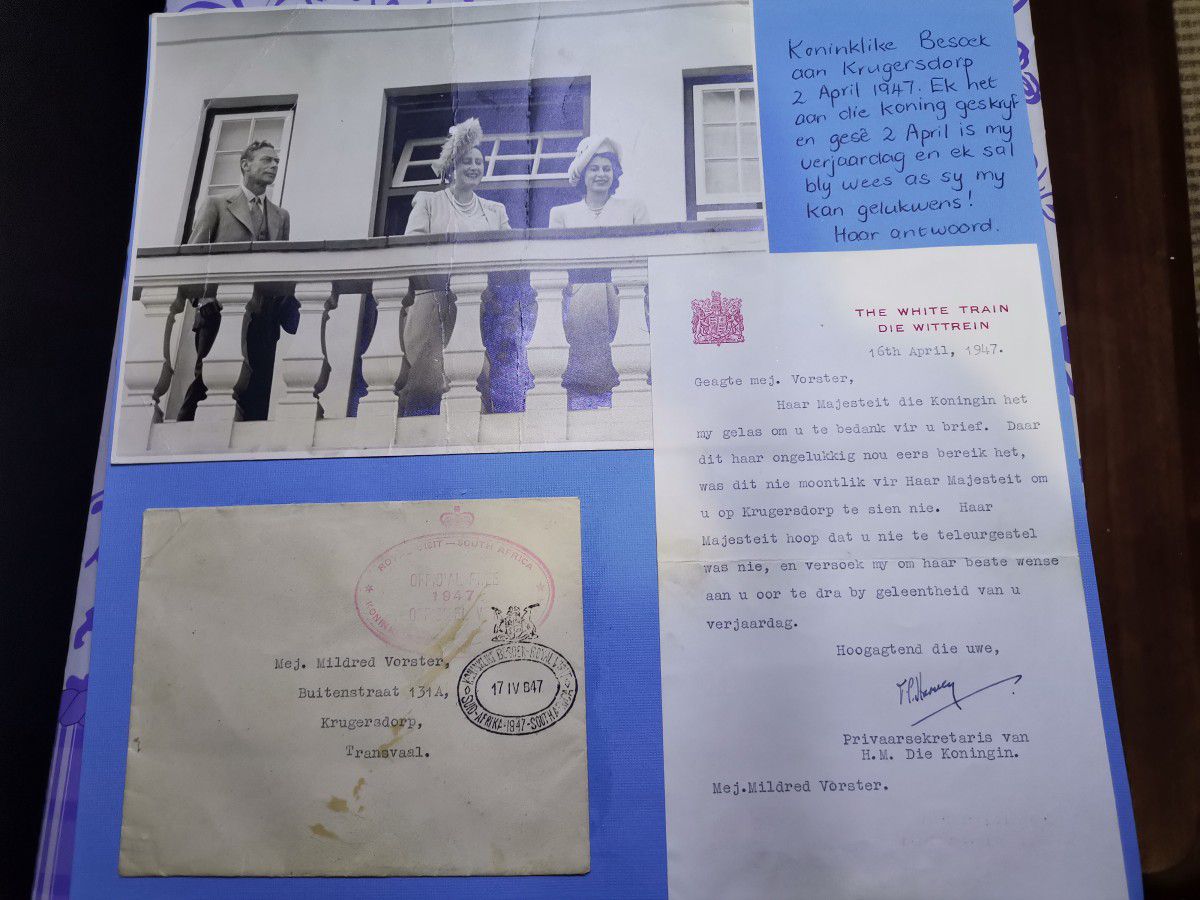 An 87-year-old Johannesburg woman is the proud holder of a letter from the late Queen Elizabeth who was also fondly known as the Queen Mother. Mildred Rossouw says she holds the memory of how that special letter came to be very close to her heart.

As a proud royal supporter, Rossouw sat perched on her sofa, glued to her TV screen with a cup of tea for the broadcast of Queen Elizabeth II’s state funeral on Monday 19 September.

The 96-year-old British monarch passed away at Balmoral Castle, in Scotland, on Thursday 8 September.

A chance to meet the king and queen

An 11-year-old Russouw was nearing her 12th birthday in April 1947 when Queen Elizabeth and the then Princess Elizabeth and her family was scheduled to visit her home town of Krugersdorp.

Five years later, the princess was crowned as Queen Elizabeth II following the death of her father, King George VI. Little Mildred had grown up with a fascination for royal families, poring over books depicting stories of kings, queens, princesses and princes.

Meeting the royal family of England was a dream of hers and upon hearing about their planned visit, she penned a letter to Queen Elizabeth asking the royal to wish her a happy birthday when she came around!

At the time, South Africa still had King George VI as its head of state despite being an independent nation, according to BBC.

“Because I am so fond of the royal family, I decided to ask the Queen to congratulate me on my birthday [2 April 1947] when they were coming to my home town. I wrote her a letter in Afrikaans and I sent the letter off to the White Train because that is what they were travelling on throughout their tour. The Queen did not pitch up saying ‘Happy Birthday’, but of course I understood because they were busy,” said Rossouw.

A royal seal in the mail

Although she didn’t get an immediate response, Rossouw was pleasantly surprised two months later when a letter, containing the royal seal of the Windsor family and addressed to her, arrived in the mail. She finally had her reply!

The letter was from the office of the Queen Mother. Because the reply was written in Afrikaans, she reasoned that perhaps someone had translated the royal correspondence for her benefit.

“Her Majesty the Queen has instructed me to thank you for your letter. Unfortunately we have only just received the it, so it was impossible for her majesty to see you in Krugersdorp. Her majesty hopes that you were not too disappointed and requests me to send her best wishes to you for your birthday,” a translation of the original letter in Afrikaans, reads..

It appears to have been written on the White Train, on which the royal family was travelling through the country as indicated by the address.

An unbroken bond with the royal family

The letter is now a cherished relic carefully placed in her scrapbook along with photos and trinkets she has collected during her nearly nine decades on Earth.