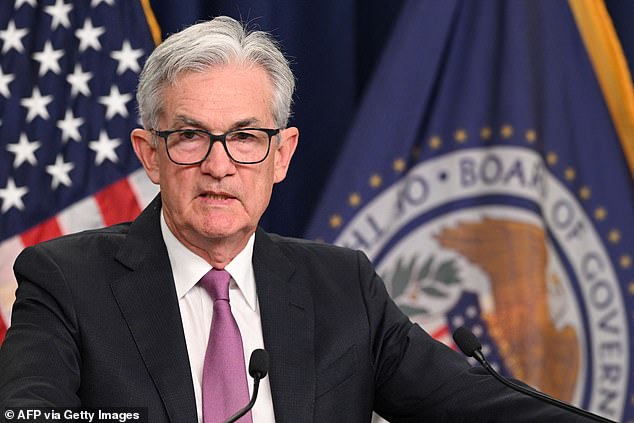 The Federal Reserve is expected to issue another unusually large rate hike on Wednesday afternoon, deepening the risks of a sharp economic downturn and job losses.

The Fed is attempting to cool down the economy in order to tame rampant inflation, which remains stubbornly high at 8.3 percent — but as interest rates climb, the path to a so-called ‘soft landing’ for the economy is narrowing.

The US economy has already been flashing warning signs for some time, including six straight months of contraction in the first half of the year, meeting one informal definition of a recession — but President Joe Biden denies a recession has begun.

At the end of its two-day policy meeting on Wednesday, the US central bank will likely lift its policy rate by 75 basis points for the third time to a range of 3 percent to 3.25 percent, the highest level since 2008.

The policy decision will be issued at 2pm, and will be followed by Fed Chair Jerome Powell’s news conference, which will be closely watched by investors for signs of policymaker’s outlook on the economy.

The Fed’s next rate decision will be issued at 2pm, and will be followed by Fed Chair Jerome Powell’s news conference, which will be closely watched by investors

His remarks will be parsed for any hint of whether the Fed expects to moderate its rate hikes in the coming months – or instead to continue tightening credit significantly until it’s convinced that inflation is on its way down.

In a further sign of the Fed’s deepening concern about inflation, it will also likely signal Wednesday that it plans to raise rates much higher by year’s end than it had forecast three months ago – and to keep them higher for longer.

Economists expect Fed officials to forecast that their key rate could go as high as 4 percent before the new year.

They’re also likely to signal additional hikes in 2023, perhaps to as high as roughly 4.5 percent.

By raising its key short-term interest rate, the Fed is attempting to cool down the economy in order to tame rampant inflation, which remains stubbornly high at 8.3

Short-term rates at that level would make a recession likelier next year by sharply raising the costs of mortgages, car loans and business loans.

The Fed intends those higher borrowing costs to slow growth by cooling a still-robust job market to cap wage growth and other inflation pressures.

Yet the risk is growing that the Fed may weaken the economy so much as to cause a downturn that would produce heavy job losses.