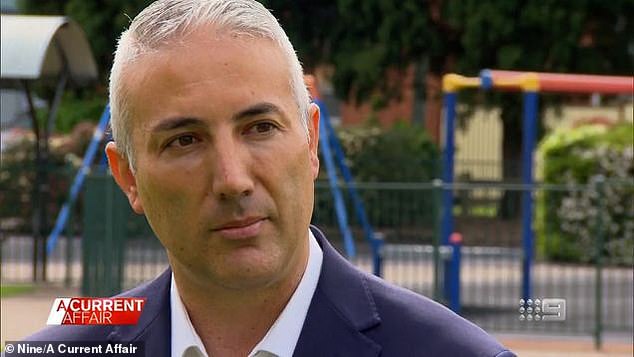 Locals have deemed the placement of ‘woke’ anti-racism street signage near a Sydney war memorial to be insulting, treacherous, and un-Australian.

But one near the Anzac Memorial Wall in the local park becomes the subject of a fierce dispute.

Steve Christou, an independent councilman, believes that the signs in the ethnically and linguistically diverse area where 70% of the population speak a language other than English dishonor the legacy of the slain Diggers.

The #racismNOTwelcome street signs divide locals in the Cumberland neighborhood in western Sydney.

The sign near the war memorial was deemed risky, disrespectful, and just un-Australian by him.

“Make your protests extraordinary! However, do it elsewhere,’ he said on A Current Affair.

It is quite disrespectful.

They are making a point utilizing this park and what it implies by placing it there. Shift it.

Mr. Christou has been joined by three other council members in pushing for the removal of the sign.

Stever Christou, a Cumberland councillor, describes the #racismNOTwelcome banner near the war memorial as “treacherous” and “un-Australian.”

At the next council meeting, a motion to do so will be discussed.

Cllr Christou desires that all #racismNOTwelcome signs, which reportedly cost council $5,000 to build, be “thrown away.”

He stated, “There should be no place for them anywhere.”

If you want to eradicate racism, go out and launch some education initiatives.

‘Residents fear it would depreciate the value of their homes because there is a sense in the streets where they live that people are looking at them and thinking there may be racism in this neighborhood.

Dave Williams, a veteran and Bundjalung man, is adamantly opposed to the #racismNOTwelcome sign being placed near a war memorial.

Channel Nine contacted locals to obtain a broader sense of opinion regarding the signs.

One woman questioned their necessity and derided their efficacy.

“What prompted that?” she asked.

“Where I live, it will not be required.

You read a sign and say to yourself, “Okay, I won’t be racist.”

‘It doesn’t work. It is ineffective.

Nevertheless, several of the locals interviewed said the signs were “essential” and conveyed a “positive message.”

Lisa Lake, the Labor mayor of Cumberland, has declined an interview on the signs but has issued a statement.

Ms. Lake stated, “We seek to accept all nations, cultures, and religions and provide a friendly, inclusive environment for all.”

“Cumberland is one of the most cosmopolitan neighborhoods in Sydney, and we try to accept all countries, ethnicities, and religions and provide a welcoming, inclusive environment for all.”

Former Socceroo Craig Foster (pictured) is one of the campaign’s major activists.

The battle against racism represents these principles.

Seventy percent of Cumberland’s inhabitants speak a language other than English, according to official statistics.

The criticism resulted in a motion before the council that stated, “Locals argue the signs convey the erroneous impression that Woollahra locals are racist, despite the fact that no proof to that effect has been given.”

Craig Foster, a former Australian soccer player, is one of the primary activists behind the #racismNOT welcome campaign, which was established last year.