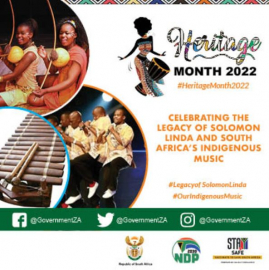 President Cyril Ramaphosa will on Saturday deliver the keynote address during the National Heritage Day celebrations at the Union Buildings in Tshwane.

The President will lead the nation in celebrating South Africa’s indigenous music and its immense contribution to sports, arts, culture and heritage.

This year’s national celebrations will be held under the theme “Celebrating the Legacy of Solomon Linda and South Africa’s Indigenous Music”.

The annual event embraces the vast cultural diversity and history that distinctively marks the country’s heritage.

This year’s theme pays tribute to the 60th anniversary of the passing of singer and songwriter Solomon Popoli Linda.

He is best known as the composer of the song, “Mbube”, which later became the popular music success “The Lion Sleeps Tonight” and gave its name to the Mbube style of isicathamiya a capella music.

In a statement on Thursday, The Presidency said that Heritage Month 2022 focuses on South Africa’s indigenous music with a spotlight on isicathamiya music and its immense contribution to sport, arts, culture and heritage, especially for emigrant communities in hostels, townships and peri-urban areas.

“It also presents an opportunity to commemorate the centenaries of our late resistance and liberation struggle icons, and honour their contributions towards a free and democratic South Africa,” the Presidency said.

“South Africans are encouraged to take pride in celebrating and appreciating the country’s indigenous music and our heritage as a vehicle towards social cohesion and nation building,’ the Presidency said.

Ahead of President Ramaphosa’s keynote address, a carnival procession featuring colourful and flamboyant dance will move from the Union Buildings to Burgers Park in Tshwane.

The carnival float will be an expression of the nation’s diverse origins, traditions and rich tangible and intangible heritage.