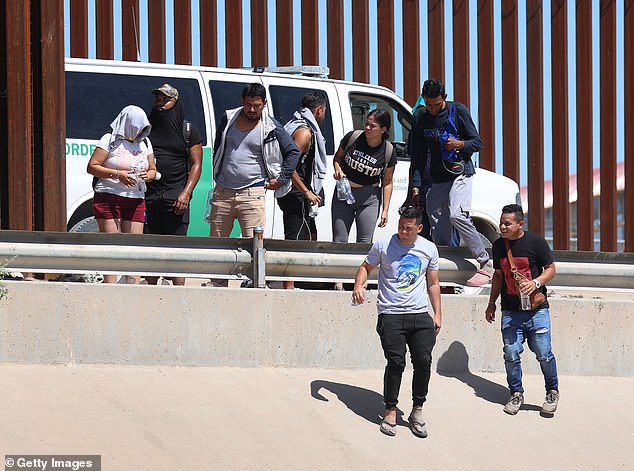 In an effort to recapture the House in 2022, Republican leader Kevin McCarthy is announcing a new strategy that includes sending additional troops to the border, combating ‘woke’ policies, and going to war with China.

The GOP’s Commitment to America, which will be unveiled on Friday in Pennsylvania at an event headed by McCarthy, includes a five-point plan to secure the border, which would fully fund border enforcement and eliminate catch-and-release loopholes.

It also allocates more resources to hiring local and state law enforcement and cracks down on prosecutors who decline to prosecute cases against violent criminals in an effort to reduce rising crime rates.

According to Republicans with knowledge of the idea, the approach would establish a special committee completely focused on China and the growing threat posed by the communist nation.

In addition, House Republicans seek to enact a “Parents’ Bill of Rights” to offer parents a greater voice in their children’s public school education.

The minority leader’s policy tries to handle all of the country’s biggest concerns by essentially doing the opposite of what Democrats have done over the past two years, which has resulted in record-high inflation, increased reliance on foreign energy, and a rise in crime in all major U.S. cities.

McCarthy told DailyMail.com in an exclusive interview that his strategy contrasts with the Democrats’ agenda, which he asserts “has failed the hardworking men and women of America over the past two years.”

McCarthy continued, “Democrats in Congress who are not looking out for your best interests have allowed the Biden administration’s reckless spending, support for lawless open borders, and attacks on their political opponents to continue unchecked.”

Friday in Pennsylvania, House Minority Leader Kevin McCarthy unveils his Commitment to America agenda alongside 30 Republican colleagues. McCarthy told DailyMail.com that in the previous two years, the Democratic agenda has “betrayed the hardworking men and women of America.”

The proposal consists of a five-point approach to solve the problem at the southern border, the distribution of more funding to reduce crime and hire law enforcement, and the combating of online censorship.

Republicans want to end alternatives to detention programs that allow migrants to unlawfully enter the United States, seek asylum, and remain in the country while their immigration case is pending.

In the majority of cases, migrants who enter the country fail to appear for court hearings.

To close these loopholes, Republicans want to implement the Remain in Mexico policies, a Trump-era agreement with America’s southern neighbors that allows asylum-seeking migrants from Mexico to be returned to Mexico to await immigration proceedings.

Additionally, the plan includes a proposal to increase money for border enforcement organizations, whose employees report being overworked and underfunded.

The focus of the GOP on the U.S.-Mexico border comes as the Biden administration fails to execute strategies to stem the massive influx of migrants into the country over the past two years.

The focus on the border is in response to charges that the Biden administration is not enacting strategies to combat the ongoing migratory crisis. On September 21, migrants from Venezuela walk along the U.S. border wall to report to Border Patrol after crossing the Rio Grande from Mexico.

In the first eight months of Fiscal Year 2022, Customs and Border Protection (CBP) has encountered more than 2 million migrants, a record number. More than 780 deaths of migrants along the border have been reported this year, according to further statistics.

Since they began busing and flying migrants out of their states to sanctuary jurisdictions such as New York, Chicago, Washington, D.C., and Massachusetts, southern Republican governors have gotten a great deal of criticism.

A class action lawsuit has been filed against Florida Governor Ron DeSantis after he transported 50 migrants to the luxurious Martha’s Vineyard island off the coast of Massachusetts last week. The lawsuit alleges that the migrants were tricked into boarding the aircraft by being told they were headed to New York City or Washington, D.C.

At least two congressional committees run by Democrats are considering investigations into the flight.

The Biden administration guarantees that they are addressing the “root causes” of migration in an effort to determine why people leave their home countries and seek refuge in the United States. However, Republicans assert that this method has resulted in an open-door policy that permits unchecked illegal immigration.

Surprisingly, the Republican plan does not include anything regarding the completion of Trump’s southern border wall, which many party members believe is essential to protecting the United States from illegal immigration and human and drug smuggling.

As Mexican drug cartels continue to send the narcotic across the border, the party wishes to ban all unlawful forms of fentanyl.

Americans are dying daily from fentanyl overdoses, with some unaware they are taking the poison due to adulteration with another illegal substance.

This week, numbers for the month of August were revealed, bringing the overall number of Customs and Border Protection (CBP) interactions with migrants to more than 2 million in Fiscal Year 2022.

A handout on the party’s Commitment to America strategy, which was inadvertently leaked early Wednesday evening after McCarthy’s website went up before it was swiftly password locked, reveals that the majority of the party’s efforts will be devoted to economic recovery.

To achieve this goal, Republicans seek to reduce government expenditure to help reduce the prices of food, petrol, vehicles, and homes.

In addition, they seek to make the United States more independent by shifting supply chains away from China by growing domestic manufacturing and utilizing natural resources to lessen dependency on foreign oil and energy.

McCarthy announced the formation of seven task teams at the 2021 GOP retreat in Orlando, including the China Task Force, which will lay the framework for a select committee on CCP. Representative Michael McCaul, ranking member of the Foreign Affairs Committee, was appointed head of the China-related task team.

In addition, they wish to strengthen America’s economic competitiveness and cyber resiliency as China’s threat to western competition and security grows.

McCarthy was planning to create a China select committee in 2020 when he was working on a bipartisan initiative with Democrats before they withdrew. The Republican-only task team he established is intended to replace this initiative.

McCaul’s task force, comprised of members from various committees, labored throughout the year to compile a final report with hundreds of China-related policy suggestions.

The principles include an emphasis on fostering a healthy economy and lowering crime in U.S. cities and at the border through conservative policies.

In addition, it recommends excluding transgender women from school athletics for girls and “safeguarding the lives of unborn infants.”

‘PARENTS’ BILL OF RIGHTS’ AND ABORTION

It would ensure that parents are aware of what their children are learning in school, how their tax money are being spent, and that they can speak freely at school board meetings without fear of expulsion.

The so-called “Parents’ Bill of Rights” would also target transgender students by preventing those born male from competing with women and ensuring that only biological females can participate in ladies sports.

The administration of President Joe Biden has proposed new rules to expand Title IX’s definition of “sexual orientation” to cover transgender pupils. This would permit children and adolescents who identify as the opposite sex to which they were born to compete in sports and use locker rooms and restrooms corresponding to their claimed sex.

Parents, student athletes, and concerned members of the community assert that this would be unfair to women and make it impossible for young girls to compete fairly in sports because they would constantly be at risk of confronting biological men.

A portion of the Commitment to America on preserving constitutional freedoms contains a point on “saving the lives of unborn children” as another priority for women and families.

Republicans have stated that they will not pursue a nationwide ban on abortion, but they have demonstrated a willingness to move forward with limitations on pregnancy termination now that Roe v. Wade has been overturned.

The GOP’s Commitment to America addresses safeguarding unborn children after Roe v. Wade was overturned by the Supreme Court in June, removing government protections for abortion.

McCarthy and Republicans are likewise concerned with minimizing enormous rises in violent crime, particularly in major cities, despite the fact that the U.S. border is a primary emphasis for reducing crime.

Despite a significant decline in morale, the party intends to hire an additional 200,000 police officers by instituting recruiting bonuses and incentives to join or remain in law enforcement.

As a result of Democratic proposals to defund police and heightened scrutiny of officers, fewer individuals are leaving the field or enrolling in police academies.

McCarthy’s strategy also includes a crackdown on municipal and state prosecutors who do not pursue cases involving violent crimes.

To do this, the GOP intends to prevent “woke” district attorneys from getting federal funding.

According to a Republican familiar with the scheme, “if woke district attorneys won’t do their job, they don’t deserve another dollar of federal money.”

As of May, violent crimes such as homicide, rape, and assault in some of the nation’s most populous cities climbed by 5 to 40 percent compared to the same period in 2021 and 2022.

McCarthy told DailyMail.com of the present quo, ‘If the American people entrust Republicans with a majority in the House, everything changes on day one with the Commitment to America.’

Republicans are committed to guaranteeing a robust economy, a safe nation, a future based on freedom, and a government that is ultimately held accountable.

McCarthy and 30 of his House Republican colleagues will unveil the Commitment to America directly at a metal sheet manufacturing factory on the suburbs of Pittsburgh, Pennsylvania on Friday.

In preparation for the midterm elections in November, the Republican conference is in the process of organizing a series of fall events to showcase their strategy to the American public.

The seven Republican task forces were tasked with releasing reports on a rolling basis.

Jobs and the Economy is led by Patrick McHenry, Future of American Freedoms by Jim Jordan, American Security by John Katko, Big Tech, Censorship, and Data by Cathy McMorris Rodgers, Healthy Futures by Brett Guthrie and Vern Buchanan, Energy, Climate, and Conservation by Garret Graves, and China by Michael McCaul.