A notable Anambra Business tycoon, and the owner of Lovebite Foods and Beverages Limited, manufacturers of Lovebite bread, Chief Onyebuchukwu Augustine Nwosu has organized a thanksgiving mass and appreciation party at Nnobi, Idemmili South Council Area to show gratitude to God and his customers.

The events which respectively took place at Saint Paul’s Catholic Church Nnobi, and Chief Nwosu’s compound at Umuru village Nnobi attracted family, friends and customers of Lovebite Foods and Beverages limited from within and outside Anambra state, who went home with various gift items for partnering and patronizing the company last year. 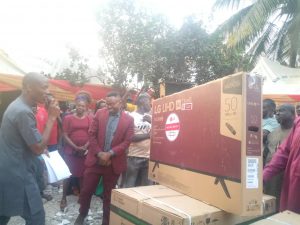 While presenting the gifts to the customers, the General Manager of the Lovebite Foods and Beverages limited, Chief Nwosu who went down memory lane on how he established the company two years ago, said the thanksgiving and customers appreciation are the company’s annual ritual through which they appreciate God, and strengthen their relationship with customers.

In an address, a Director in the Lovebite Foods and Beverages limited, Mrs Chinyere Odukwe, assured that the company will continue to contribute its quota in community development and human capacity building, and promised customers of sustained quality products and services.

In separate remarks, President General of Nnobi community, Barrister Dominic Okpala, the Chairman on the Occasion, Dr Pat Mbanefo, and a Chieftain in the area, Barrister Chukwudi Ezenyi said that Chief Nwosu has contributed immensely to the development of Nnobi community, including employment of the teaming youths, road construction, drilling of water borehole, rebuilding of Nnobi Police station which was destroyed during the End-SARS protest, and described his relationship with the customers as incomparable.

The beneficiaries of the Lovebite Foods and Beverages Limited customers largess, including a Journalist, Mr Ifeanyi Ekeka who received the sum of one million naira for winning the 2022 Face of Lovebite, Mr Benjamin Ezedia who received a shuttle bus, and Mr Longinus Okoye who smiled home with brand new motorcycle, thanked Lovebite Foods and Beverages limited for the gesture, and assured to redouble efforts in promoting the product. 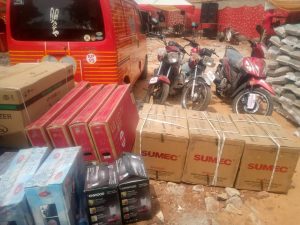 Earlier in a homily during the thanksgiving mass, the Parish Priest of Our Lady Queen of Heaven Church Amaechi, Reverend Father Humphrey Anameche, called on Christians to wake to their responsibility of nation building, attributing the daily increasing social ills in the present Nigeria to the inability of Christians to speak up when things are wrong.