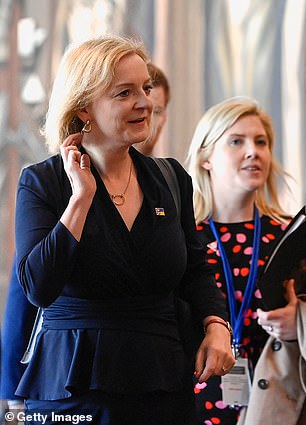 Liz Truss is braced for bruising first talks with Joe Biden in New York tonight after the US president vowed to read her the riot act over Northern Ireland.

The new PM and Mr Biden are due to sit down on the fringes of the United Nations general assembly this evening.

But although the leaders will find common ground on the Ukraine crisis, there will be concerns that flashpoints could derail the latest incarnation of the ‘special relationship’.

US national security adviser Jake Sullivan has made clear Mr Biden wants to discuss the Northern Ireland protocol ‘in some detail’, having urged her to resolve the long-running row with the EU.

As Ms Truss pushes her plans to slash taxes to boost growth, the president also tweeted yesterday that he is ‘sick and tired of trickle-down economics’.

While the barb was seemingly for domestic consumption instead of aimed at the PM, it underlines the gulf in their political stances.

Ms Truss is forging ahead with her controversial Northern Ireland Protocol Bill, despite the EU complaining it will breach international law by suspending elements of the Brexit agreement.

She did not discuss the protocol with France’s Emmanuel Macron in a meeting yesterday, and No 10 refused to say if she will raise it with European Commission president Ursula von der Leyen later.

Mr Sullivan told reporters the president ‘will encourage the UK and the European Union to work out an effective outcome that ensures there is no threat to the fundamental principles of the Good Friday Agreement’.

‘And he will speak in some detail to her about that,’ he added.

The adviser said Mr Biden will ‘communicate his strong view that the Good Friday Agreement – which is the touchstone of peace and stability in Northern Ireland – must be protected.

‘And we must collectively take steps – the US, the UK, the parties in Northern Ireland, the Republic of Ireland – to ensure that it is protected,’ he added.

Ms Truss’s official spokesman stressed that the protocol is an issue ‘we want to resolve with the EU’.

Tweeting yesterday at the PM was giving interviews about her tax plans, Mr Biden said he was ‘sick and tired of trickle-down economics’.

‘It has never worked,’ he said.

Ms Truss did not discuss the Northern Ireland protocol with France’s Emmanuel Macron in a meeting yesterday (pictured), and No 10 refused to say if she will raise it with European Commission president Ursula von der Leyen later

The PM’s spokesman said it was ‘ludicrous’ to suggest Mr Biden was criticising UK policy, arguing each country is facing different economic challenges.

Mr Sullivan welcomed Ms Truss’s ‘robust and unwavering support for Ukraine’s sovereignty and territorial integrity’ and said Russia’s invasion would be a point of conversation.

The ‘challenges posed by’ China, the energy crisis and the ‘economic relationship between the US and the UK’ were also billed.

But Ms Truss has notably acknowledged during her trip that a US-UK trade deal, prized by Brexit supporters, is years away.

‘There aren’t currently any negotiations taking place with the US and I don’t have an expectation that those are going to start in the short to medium term,’ she said.

Mr Biden was meant to hold talks with the premier in the UK as he visited to attend the Queen’s funeral, but they were delayed until Ms Truss’s US trip.