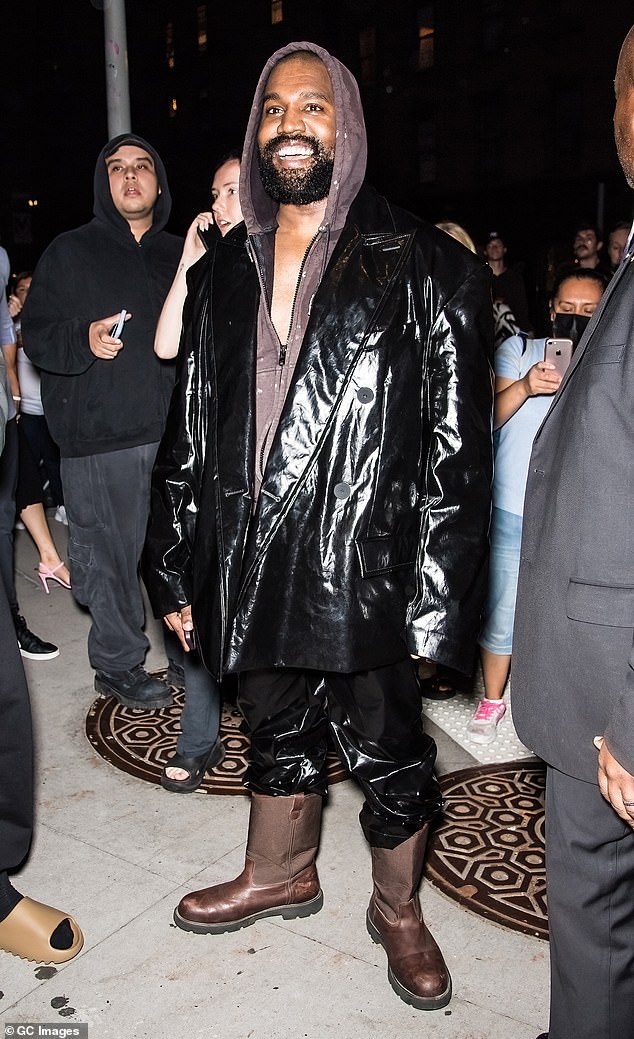 Kanye West has said he is open to returning to politics, insisting that he had not been put off by his failed presidential bid in 2020.

The rapper, whose father battled stomach cancer in 2018, said that he intended to work to cure the disease.

He said he would work on promoting ‘fresh air and food’.

In October 2018, West said his father Ray’s cancer was in remission, and he was embarking on a strange diet to celebrate.

‘Overcome fear,’ Kanye captioned an Instagram photo showing the insects. ‘My dad and I are going to eat this plate of bugs to celebrate him beating cancer. No more fear.’

He discussed in the wide-ranging interview his co-parenting with ex-wife Kim Kardashian, saying they clashed on certain issues, but worked to resolve them.

Asked on Thursday if he had future political aspirations, West replied: ‘Yes, absolutely.

‘You know, that time wasn’t in God’s time. I’m sure there are lives that were saved.

‘I’m sure God had me fall on the sword and say this is not the time,’ he told ABC News on Thursday night.

‘He’s given me new purposes. A new lease on life. New air to breathe. And a new respect.’

He added that he was spending time with Jared Kushner.

Kanye West has spoken to ABC News, in an interview that previewed on Thursday night.

‘His brother said he’d kill him if he went back to the White House. That’s the answer,’ West replied, when asked whether that was a genuine friendship or a political move.

West said he had met the mayor of Miami, Francis Suarez, and thought ‘he would make a really good president, also.’

Linsey Davis asked: ‘In addition to you?’

West replied with a smile.

Davis asked him whether he thought social media was helpful or harmful to him.

In a series of Instagram posts last month, the rapper – who has been open in the past about his bipolar disorder diagnosis and ongoing struggles with mental illness – accused Kardashian of trying to control their children’s lives and schooling.

West said he thought social media could be helpful and harmful.

‘That’s one of my favorite questions of this interview,’ West said.

West, 45, was asked by Linsey Davis about his relationship with social media

West and Kardashian have four children together: North, Saint, Chicago and Psalm

West was asked about his parenting style, and what it was like to co-parent with his ex-wife Kim Kardashian.

She filed for divorce in February 2021, and their separation was finalized in June this year.

‘I have a voice, and I don’t agree with certain things, as a dad and as a Christian,’ he said.

His comments come weeks after he accused his ex-wife and Hulu, the Kardashian family’s streaming giant partner, of railroading him when choosing where the kids go to school.

He compared himself to a sperm donor, arguing that he had been left without a say, and fumed over the fact that the children were attending an expensive private school in Los Angeles when he wanted them to go to his school, the Donda Academy, set up in honor of his late mother.

Kanye West sits down with ABC News to discuss parenting.

I have a platform, and I get to say what so many dads can’t say out loud. There are so many situations where an entire family can go and basically take control of the kids.

‘I know so many people that hit me, like, out of Chicago, and say: yo, I just went through the same thing as you.

‘It was all something of a disregard for what I co-created.

‘And I let everyone know that there is actually a through-line, a parallel.

‘And that does touch on discrimination.’

He accused Kardashian, in a conversation he shared on Instagram, of disrespecting him because she is ‘half white’.

‘Y’all don’t have so so over my black children and where they go to school,’ he wrote in one message.

The Chicago-born musician and businessman, however, said on Thursday he had a ‘new respect’ for Kardashian, and that he always wanted her to be ‘calm’.

‘This is the mother of my children, and I apologize for any stress that I have caused, even in my frustration, because God calls me to be stronger,’ he said.

‘I need this person to be less stressed and of the best, sound mind and as calm as possible to be able to raise those children at the end of the day.

At Donda, he said children ‘spread’ and ‘sing’ the gospel.

He added that his aim was ‘to build a school that gives kids practical tools that they need in the world.’

He said, in an interview earlier this month, he wanted children to learn about space travel in a ‘shoutout to Elon Musk’.

‘We have to allow for self-confidence. So many schools take away from the confidence that these future leaders have for themselves.

‘Those less confident leaders lead on lying, as opposed to leading on the truth first.

Photos exclusively obtained by DailyMail.com last week show the eerie campus that was deserted in the middle of the day on September 14, a Wednesday.

There were no cars in the parking lot and no signs of life.

The school, that aims to provide a Christian education, could have been observing the Exaltation of the Holy Cross, a saints day celebrated on September 14 that commemorates the discovery of the cross that Jesus Christ was crucified on.

There are around 100 students enrolled at the school in addition to 16 full-time teachers. It’s unclear where they were on the day the pictures were taken.

West was in New York City on September 14, at Fashion Week.

Photos exclusively obtained by DailyMail.com show the eerie campus that was deserted in the middle of the day on September 14, a Wednesday

Little was known about the school until Rolling Stone published an expose. The school is named for West’s mother, Donda

On the school’s website, the Donda Academy says its goal is ‘to provide youth with the passion, purpose and spiritual foundations they need to thrive in tomorrow’s world

The website describes the school as providing students with ‘a world-class education that includes a rigorous core curriculum, and an emphasis on sustainability, creativity, critical thinking and problem solving

Little was known about the school until Rolling Stone published an expose.

On the school’s website, the Donda Academy says its goal is ‘to provide youth with the passion, purpose and spiritual foundations they need to thrive in tomorrow’s world.’

The website describes the school as providing students with ‘a world-class education that includes a rigorous core curriculum, and an emphasis on sustainability, creativity, critical thinking and problem solving.’

The school teaches pre-K through to 12th grade. Tuition for the school costs $15,000 per year. Around half of the students are receiving financial aid.

Among the students is singer Keyshia Cole’s son Daniel.

On Thursday, West vowed to continue with his legal fight with Adidas and Gap, saying: ‘We got new lawyers…we really had to level up and really show them who’s the new boss in town.’

He was confronted with the infamous 2013 video of him unleashing on journalist Sway Calloway, who asked him, in a radio interview, why he didn’t launch the clothing and shoe brand alone.

West replied angrily: ‘You don’t got the answers, Sway!’

On Thursday, he relented, that he had been right all along.

‘You know what, I’d go ahead and say Sway had the answer. People are gonna be like ‘no!”

He said he now intends to sell Yeezy products direct to consumers.

During the ABC interview, he said he thought people believed he was ‘crazy’ because of his faith.

‘When I finally go to heaven and get to talk to God, I’m going to say: why did you let all these people think I was so crazy?

‘And God is going to say, well, it was a camouflage. I was protecting you.’

West has been open in the past about his bipolar diagnosis.

In a candid 2019 interview with David Letterman for his Netflix show My Next Guest Needs No Introduction, he explained how he felt during manic episodes.

‘You have this moment [where] you feel everyone wants to kill you. You pretty much don’t trust anyone.

‘When you’re in this state, you’re hyper-paranoid about everything, everyone.

‘This is my experience, other people have different experiences. Everyone now is an actor. Everything’s a conspiracy.

‘You feel the government is putting chips in your head. You feel you’re being recorded.

‘You feel all these things.’

At the time, he advocated for taking daily medication.

‘If you don’t take medication every day to keep you at a certain state, you have a potential to ramp up and it can take you to a point where you can even end up in the hospital.

‘And you start acting erratic, as TMZ would put it.’