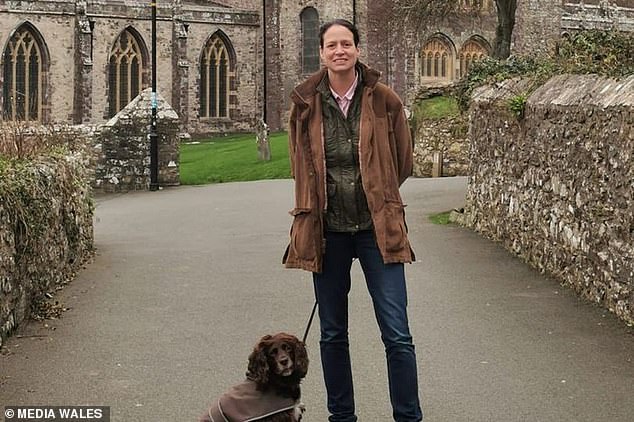 When confronted by authorities, an intoxicated lady who had mistaken a sidewalk for a road claimed that her dog was behind the wheel.

Melissa Jenkins Johanson, a scientist, was already barred from driving after being caught driving under the influence in November.

In February, after leaving the Ocean Café Bar and Restaurant, she made four intoxicated attempts to back out of a parking lot around noon in Fishguard, Pembrokeshire. Eventually, a passerby saw her intoxicated condition and called the cops.

At her sixth effort, Ms. Johanson backed out of the parking lot and onto the sidewalk, where she struck a bus stop that was just a few feet from a children’s play area.

The prosecutor, Hannah George, described in court how employees of the café rushed outside to inform families that Ms. Johanson was driving on the sidewalk.

She ultimately crossed over to the main road and stopped there for a while, Ms. George told the court.

“She then proceeded to the Seaview Hotel and continued on to Tesco, where she was discovered on CCTV.”

When two Dyfed Powys Police officers came to Ms. Johanson’s house, she attributed her driving to her dog, Lily.

“The cops discovered the automobile badly damaged when they got to her residence,” Ms. George stated. The cops entered the building after that, and the stench of alcohol struck them right away.

She claimed that both her dog Lily and a friend had driven the car after asking the police whether they had any evidence supporting her arrest.

Following that, the defendant was requested to take a breathalyser but declined. After being brought into jail, she was once again requested to provide a blood sample, but she declined.

She was probably that drunk for a reason, Judge Rees said. For a start, “she was talking incomprehensible crap about her dog.”

Witnesses reported seeing Ms. Johanson driving around the park while intoxicated and with little regard for the people in her path.

Ms. Johanson’s attorney, Dean Pulling, described his client as a successful lady who had worked in food production for 20 years.

She has a lengthy history of mental health issues and has been identified as having emotionally unstable personality disorder, he said.

Mr. Pulling further emphasised that Ms. Johanson was travelling at a moderate pace and did not cause any accidents.

She didn’t seem to be driving recklessly, he said, and there was no sign of a police chase throughout the event.

because she complied with the terms of the community service sentence imposed on her for a prior offence in November.

According to Mr. Pulling, the case had a good chance of ending in rehabilitation. He said, “Before November she had no prior convictions.”

“Drink has been your nemesis for a considerable time in recent years,” Judge Rees observed, turning to the defendant.

“In November of last year, you were found guilty of operating a car while intoxicated to an excessive level. Under the confines of a 12-month community order, you were offered the chance, albeit you took a while to respond.

“You committed these offences on February 15 of this year. Just three months before, you were no longer permitted to drive. You failed to produce a specimen because you had ingested alcohol.

“There was a strong alcohol odour at your residence when officers arrived. You made clear how drunk you were by talking incoherently.

“You were driving in and near Ocean View Car Park in this condition. You were there about noon on a piece of open space with a playground for kids.

“You tried to reverse out of the parking lot four times before climbing the sidewalk, which is obviously forbidden for driving on. You must have believed that to be the exit.

“Your perspective on the offence raises more questions.” You did not show up for the probation officer’s interview, and your first answer to the community order was not adequate. Your involvement with the Dyfed Alcohol and Drug Program has been inconsistent.

Let me be very clear: Your offence is extremely severe, regardless of how you see it. Because of your self-centered choice to consume alcohol in huge quantities and your ignorance of the repercussions, someone—possibly a child—could have been gravely hurt, permanently disfigured, or perhaps murdered.

Judge Rees sentenced the defendant to 12 months with an 18-month suspension after taking into consideration Ms. Johanson’s “background of stability and education,” as well as her “excellent job history,” and eventual compliance with a community order.

She is required to finish a 15-day treatment programme, put in 150 hours of unpaid labour, and make monthly visits to Swansea Crown so that a judge may assess how she is doing with her alcohol use.

Additionally, she is barred from driving for three years.