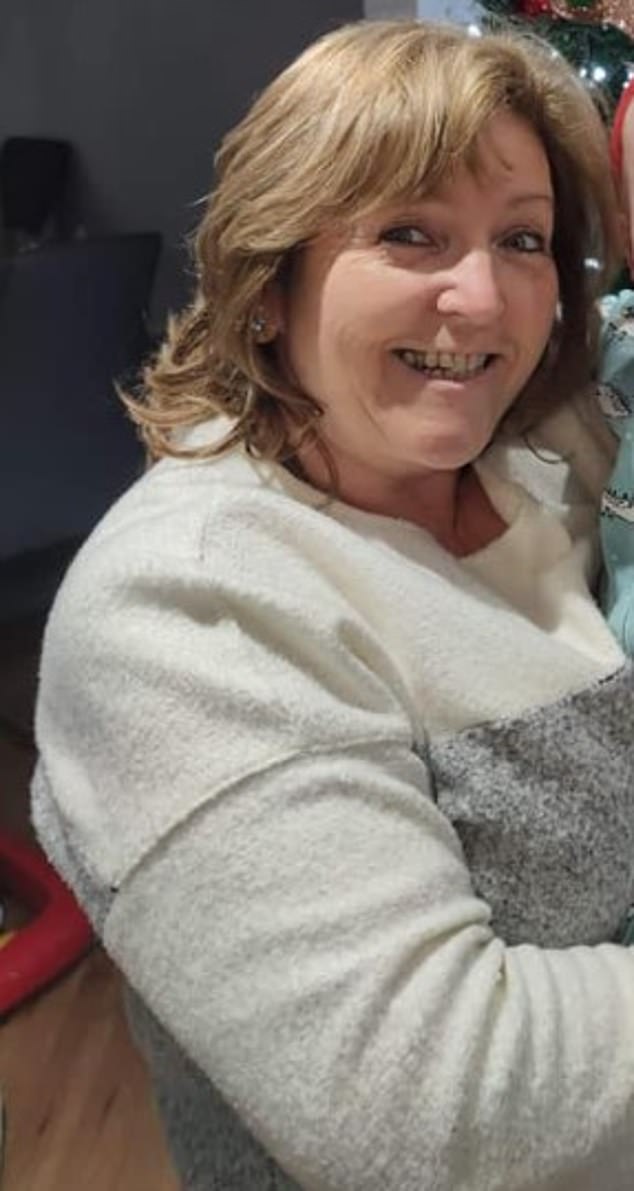 A heroic grandmother helped to stop an armed robber in his tracks at a local newsagent by sitting on him until the police arrived to arrest him.

Roseann Gibson, 63, was working in the Glasgow newsagent with her nephew in 2021 when a balaclava-clad man armed with a claw hammer burst in and demanded staff hand over the store’s cash.

Nephew Christopher Brown, 26, jumped over the counter and tackled the would-be thief to the ground while Roseann ran to assist.

The grandmother unmasked the assailant and recognised him as a previous customer at the store.

CCTV footage captured the moment Roseann, who is 4ft 11in, pinned the robber to the floor with Christopher and restrained him until police arrived.

Roseann Gibson, 63, was able to restrain the man as he tried to rob Browns Newsagent in Glasgow

CCTV footage shows the man, wearing a balaclava and armed with a claw hammer, as he enters the shop and demands the cash from the counter

The attacker, George Kinnear, was later found to be armed with a knife when he tried to rob Browns newsagent.

Roseann told the Daily Record she was shaken by shocking the incident last December.

She said: ‘When I watched the CCTV back, I was shocked. I just can’t believe I did it. A lot of things have changed since it happened.

‘Before, I would never have thought twice about standing outside the shop early in the morning while we wait to open up which I’ve done for 42 years. But now I wait in my car across the road.

‘I’m annoyed that I feel that way but I’m scared and angry. You always get dafties but this is the first time something as bad as this has happened.

‘There is a panic button right behind where Christopher was standing but his instincts took over.

Roseann said of the attack last December: ‘I was shocked. I just can’t believe I did it’

‘He said he just saw the hammer and thought about me while I was thinking about him.’

The attack happened when an elderly customer arrived at the shop with a bag of presents for Roseann’s grandson.

The customer managed to take the claw hammer from Kinnear after Christopher and Roseann had wrestled him to the ground.

Roseann added: ‘I was aware of somebody else coming in but thought it was just a normal customer. But the next minute, I saw the newspapers getting thrown over. That’s when I looked and saw the guy had a hammer.

‘By that time, Christopher had thrown the papers over and diverted him. He was coming with the hammer.

‘I managed to get the guy down using the side of my body but by that time, Christopher had flown over the counter to throw a plastic perspex screen.

‘He got him down and we sat on him. I must admit, although I say we sat on him, it was pretty hard because he was trying to get up while we were trying to keep him down.

‘I got the balaclava off of him because I wanted to see his face to see if I knew him. I did recognise him – not as a good customer but someone who had been in the shop before.

‘We just held him down. He obviously let go of the hammer and Mrs Callaghan lifted it which you can see in the video. She was obviously giving him mouth.

‘I never normally had my phone on me in the shop but I did that morning because I had been pricing something. Lucky enough, I managed to hold him down with me on top of Christopher and phoned the police.

‘They were really quick in coming. The police came back in and told us he had a knife when they searched him. I still can’t believe that this happened.’