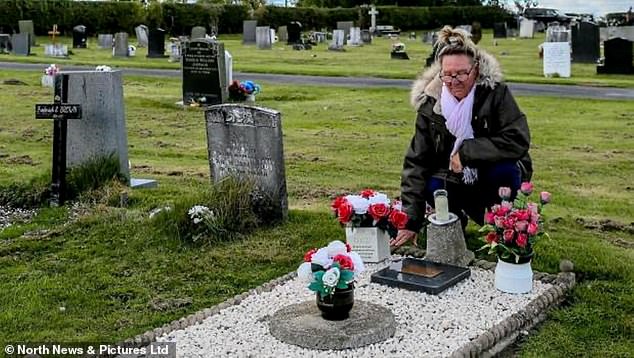 The discovery that a family has been visiting the wrong tomb for almost 43 years has devastated them.

Since 1979, 67-year-old Sylvia Ross has visited the grave she believed her father John Thomas Thompson to be buried in, leaving flowers there on her birthday, Christmas, and Father’s Day.

But Sylvia and her daughter Lynette were shocked to discover that the grave contained another coffin.

The pair realized the blunder only after spotting a Facebook post concerning the relocation of an incorrectly placed plaque at Witton Park Cemetery in Bishop Auckland, County Durham.

It was later discovered that they had been visiting the incorrect grave.

Since 1979, Sylvia Ross, 67, has visited the grave where she believes her father John Thomas Thompson is buried.

She would bring her father flowers on his birthday, Christmas, and Father’s Day.

Sylvia’s father, who died at the age of 51 from a heart problem, lies in an unmarked grave just two plots away. An inquiry is currently ongoing to determine how this error occurred.

42-year-old Lynette from Bishop Auckland stated, ‘We are disgusted and my mother is upset.

“I never saw my grandfather, but my mother has been visiting his grave for the past 43 years and is inconsolable.”

She is upset because, according to her, her father believed that no one cared for him, as he received no flowers or visits.

It is believed that the family was visiting the burial of Mr. Frederick Brown, who had passed away in the same year.

The error was only discovered when the Brown family attempted to erect a memorial on their double plot but realized there was insufficient space and informed Durham County Council.

When John was buried in 1979, Wear Valley District Council managed the cemetery, but Durham County Council took responsibility in 2009 when it became a unitary authority (file photo)

They placed it on the grave we’ve visited my entire childhood and have brought flowers for every birthday, Christmas, and Father’s Day, while he has literally lain there with nothing.

“How can they get something so easy so wrong? It’s disgusting!”

When John was buried in 1979, Wear Valley District Council was in charge of the cemetery, but Durham County Council took over in 2009 when Wear Valley became a unitary authority.

We regret the sorrow caused by this error to the family.

The cemetery would have been managed at the time by Wear Valley District Council.

“Once we became aware of the historical error, we relocated the objects to the correct grave in the shortest amount of time possible.”

We would like to offer our deepest apologies for any pain that has been caused, even though the grave has been addressed.