Skip to content
Home » News » DA says LSU studentBaton Rouge DA Hillar Moore says that the shooting death of Allison Rice, 21, appears to have been a ‘random kind of act’ 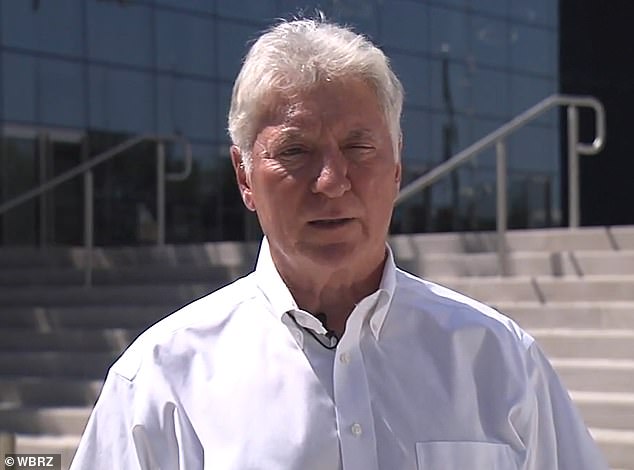 Prosecutors believe a Louisiana State University student gunned down in her was murdered at random – as rumors swirl locally the killing may have been part of a gang initiation.

Baton Rouge District Attorney Hillar Moore said in a recent interview with WBRZ  that the motive for Allison Rice’s shooting, which occurred on September 16 while the LSU student was sitting in her car at a railroad crossing, is still a mystery.

He admitted: ‘This appears to be a totally isolated, random type act.’

Moore was asked Tuesday about claims within the local community that the 21-year-old’s death was ‘part of a gang initiation.’  But he was unable to offer clarity to those allegations.

‘It’s way too early to tell. We never want to get out in front of the evidence and the facts of the case. Surely, that’s not anything that’s jumping out to me as a person that has done this for years.’ Moore told WBRZ’s Chris Nakamoto during an interview Tuesday.

He was unable to offer any further insight into why the tragedy happened. No arrests have been made, although local cops say they’ve been flooded with tips as to possible identities of the killers. It remains unclear how credible these tips are.

Officials with the Baton Rouge Police Department also echoed Moore’s statement, telling the Louisiana news outlet that they have found no evidence that the LSU student, just months out from graduation, was targeted by her attacker.

The DA also stated that several federal law enforcement agencies have been brought in to work on the case, including the FBI, DEA, and the ATF.

‘Everything that can possibly be done is being done by every agency, regardless of the initials behind their name,’ Moore said.

The new information caused Allie’s family to double down on their plea to the public.

‘I just hope that somebody speaks up- somebody that knows something, somebody that was here in this area,’ said Paul Rice, Allie’s father. ‘Please, if you’ve seen anything, call the police department, call crime stoppers, call somebody. Tell somebody, call me.’

The devastated father said earlier this week that he believes the shooting was a case of his daughter being ‘in the wrong place at the wrong time’.

Paul also said that his daughter had no enemies, and that the family doesn’t believe she was being ‘stalked’.

Paul Rice, the father of Allison Rice has said news of her untimely death has left the family devastated

The Louisiana State University senior had been on her way home from a night out with friends and was shot dead at around 2.30am on Friday near railroad tracks.

She was found in her bullet-riddled car in Baton Rouge after partying with friends at a bar on Government Street less than five minutes from where she was killed.

Speaking to Fox News, Paul said: ‘She’s not anyone that had enemies. We don’t think that she was being stalked or followed.

‘That particular area of Baton Rouge has a history of this type of activity.’

‘She’s a beautiful child. She had one year left to graduate LSU, she had her whole future ahead of her.

‘When you hear the words from the police man saying, “she’s with the coroner now, she didn’t make it.” It’s the most devastating words you can ever hear.’

Allison Rice, 21, had been studying marketing at Louisiana State University and had been preparing for an internship before her tragic murder

Friends and family have laid floral tributes to her, as well as her favorite snacks, on the street where she was shot

Allison had been trying to turn around at the tracks when she was shot multiple times through her windshield.

Friends and family have laid floral tributes to her, as well as her favorite snacks, on the street where she was shot, and also put-up a cross with her face on a telephone pole.

The first time Paul knew something was amiss was at 4:45am when the police knocked on his door to tell him his daughter had been the victim of a shooting.

He said: ‘We woke up to our dogs barking and the doorbell ringing. Cops have shown up in the middle of the night before for various reasons, things going on in the neighborhood.

‘But when they asked, “Are you Allison’s father, can we come in, please?” you knew at that point that it was going to be something terrible. I never could have imagined that the news would have been what it was.

Police rushed to the scene after witnesses reported hearing multiple gunshots at around 2.30am on Friday

Police responded to the scene around 2.30am and all that was left later that morning was a pile of broken glass after her car was removed

‘The only thing that I can really think at this point is it’s a bad case of wrong place at the wrong time.’

Officers have not yet identified a suspect in the killing and are yet to find a motive behind the attack according to sources.

Rice had been waiting for a train to finish crossing when she was shot and suffered wounds to her arm and chest.

Baton Rouge authorities discovered several shell casings close to her vehicle, as well as fast food in her lap, but nothing was taken from her car.

Paul added: ‘This is being taken very seriously but despite that, all indications right now are there are no leads.

‘They really don’t have an explanation at this point…as of now, in that particular stretch of town, they don’t have the surveillance that is necessary.’

‘As a parent I should never have to plan a funeral for my child. My mother should not have to be involved in a funeral for her grandchild,’ he said. ‘This is just heartbreaking.’

Baton Rouge Police are investigating the shooting, with Chief Murphy Paul saying after the incident: ‘I just left the scene prior to coming here.

‘Our detectives are out there canvassing the area. A lot of the investigative efforts that are going on behind the scenes. Very sad. Very sad.’

Her family is pleading for answers from the police, and is begging anyone with information to come forwards.

Sgt. L’Jean McKneely with Baton Rouge Police added: ‘Chief Paul has been working hard with getting the camera surveillance systems up, we have that downtown, were trying to push it and make it happen down to major corridors for Baton Rouge. Florida Street, Government Street.’

Rice had been working as a bartender at The Shed BBQ in Baton Rouge, where she worked with her two brothers (pictured together)

East Baton Rouge Parish Mayor-President Sharon Weston Broome added: ‘My heart goes out to the family, loved ones, and classmates of Allison Rice, a young LSU student who had her entire life ahead of her.

‘This senseless violence is completely unacceptable and Baton Rouge Police officers are thoroughly investigating to bring the perpetrator to justice.

‘Our university community is an essential part of the fabric of Baton Rouge. It is of the utmost importance as we welcome students from across our state and the nation that we create a safe environment.’

Rice’s death is the 74th this year in the East Baton Rouge Parish, and comes after a string of crimes against LSU students.

On August 19, another student was shot during an attempted robbery, and just days later two separate kidnapping cases happened on campus.

According to the FBI, Baton Rouge has one of the highest homicide rates in Louisiana.