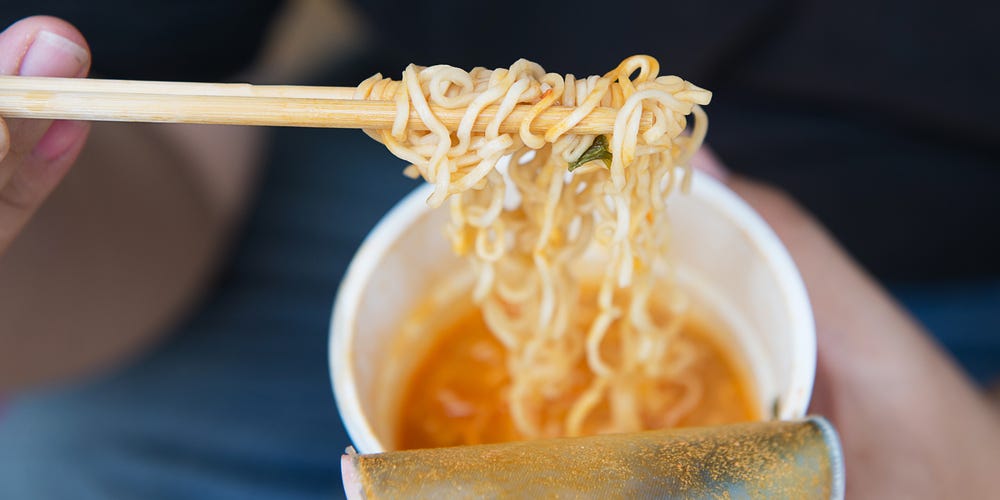 Ditch the flavor packet if the ramen isn’t from an Asian grocery store.

But Anna Rider, a food writer, chef, and recipe developer, told Insider that not all of these flavor packets are created equal.

“Popular brands at conventional grocery stores come with lackluster spices and seasonings,” Rider said. “You’re better off cooking your noodles in chicken or vegetable broth and serving them with chili oil, Sriracha, or sesame oil with red pepper flakes.”

However, keep the packet if your instant ramen is from an Asian grocery store — it’s more likely to include authentic spices that are worth adding to your meal.

Don’t cook your ramen for as long as it says on the package.

Instant ramen is meant to be served piping hot, but allowing the cooked noodles to sit in the warm broth means they may be mushy by the time you’re ready to eat.

To avoid this, Rider suggested shortening the cooking time listed on the package.

“Undercooking your noodles by one to two minutes makes them perfect by the time you’re ready to enjoy them,” Rider said.

You can prevent mushy ramen by draining the noodles immediately and rinsing them under cold water.

Cook your noodles separately to make them less gummy.

Deanna Kang, a chef and recipe developer at Asian Test Kitchen, told Insider that cooking your noodles separately could improve their texture.

“Though not totally necessary, cooking your noodles separately before adding them to ramen stock washes away extra starch and makes the broth and noodles less gummy,” she said.

Save some of the uncooked noodles to use as a topping.

Romain Devanneaux, a chef at Chez Muffy in Quebec City, told Insider that he never cooks the whole portion of noodles included in a package of instant ramen.

“I always keep a small amount of the uncooked noodles to place on top when it’s ready,” Devanneaux said. “This brings a little crunchy texture to the dish.”

If you’d rather cook all your noodles, you can top your ramen with raw shredded carrots, tortilla chips, or even croutons to add a crunch.

Add cheese or mayonnaise to your ramen if you want it to be creamier.

Chris Riley, a cook and founder of The Daring Kitchen, told Insider that cheese and instant ramen are an excellent pairing.

“Add a couple of cheese slices, parmesan, or crumbled feta after cooking the ramen for a few minutes,” Riley said. “You can also add some mayo to make the dish even creamier.”

Keep frozen herbs around to use as easy flavor bombs for ramen.

Devanneaux told Insider that adding frozen herbs to ramen noodles is a quick and easy way to introduce flavor.

“When you see that herbs in your fridge have lost their freshness, mix them with olive oil and a dash of lemon juice, and freeze them in an ice-cube tray,” Devanneaux said. “These cubes are great when added to ramen noodles.”

Cook your instant ramen noodles in canned soup for a richer meal.

If you’re looking to turn a package of instant ramen into a more substantial meal, a simple can of soup may do the trick.

“Boil some canned soup on the stove and cook the ramen in that,” Riley said. “Any vegetable or Italian soup will do the trick, and you end up with a savory bowl of ramen.”

It may be easier to cook the noodles in broth-based soups, but don’t be afraid to experiment with creamier flavors as well.

Instant ramen is a great way to use up leftovers.

One easy way to add some flavor and substance to instant ramen is to raid your fridge for leftovers.

“You can use leftovers like sliced ham or a fried egg from breakfast to make instant ramen a more complete meal,” Rider said.

Instant ramen is also a great way to make use of wilting herbs or garnishes, such as leftover basil or chopped green onion.

Add some seaweed for a traditional flavor.

For an authentic twist on instant ramen, Rider suggested adding some seaweed.

For extra toppings, opt for pickled carrots, fresh cilantro, or green onions sliced on the diagonal.

Up the umami flavor by adding soy sauce.

For the fastest and simplest way to boost the salty, savory flavor of instant ramen, add a splash of soy sauce.

“Soy sauce can enhance the flavor and complexity of the instant ramen,” Riley said. “If you prefer spice, throw in some chili sauce as well.”

Turn your instant ramen into a full breakfast by adding bacon and eggs.

“Add bacon and eggs for a great breakfast take on ramen noodles,” Riley said. “I love this because it’s fast, easy, and delicious.”

You can poach an egg directly in the ramen as it cooks, or whisk the egg in while cooking to create a rich, creamy broth.

Boil your noodles in stock instead of water.

Kang told Insider that cooking instant noodles in broth instead of water makes for a more flavorful meal.

“Start with anything except water, like chicken or vegetable stock,” Kang said. “Even adding powdered chicken bouillon will help the soup taste less like the Styrofoam cup it came from.”

Turn your instant ramen into a salad or stir-fry.

If you’re not in the mood for a noodle soup, you can transform instant ramen into a vegetable-packed stir-fry or salad.