Skip to content
Home » News » By 2025, New York City will HAVE TWO SECURITY CAMERA INSTALLED ON EVERY TRAIN CAR. 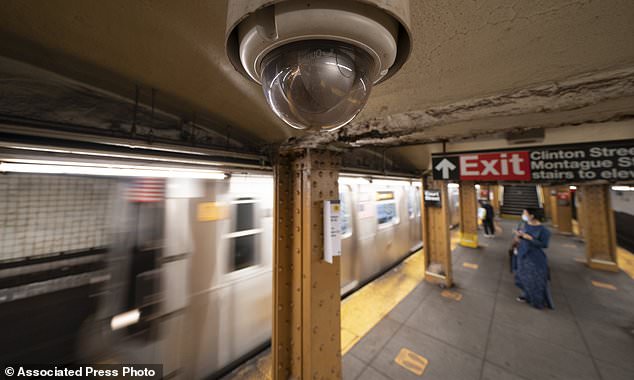 Security cameras will soon be installed in every single one of New York City‘s 6,400 subway cars, the city has announced – a painstaking $5.5milllion project designed to quash a pandemic surge in transit crime.

Speaking at a news conference in Queens Tuesday, Governor Kathy Hochul, a Democrat, unveiled the effort – as ridership on the world’s largest subway system continues to dwindle well below pre-pandemic levels.

The undertaking, Hochul said, will include the use of $2million in federal grant funding, will see two cameras in each of the city’s 6,455 subway cars.

The MTA aims to complete all of the installations by 2025, Hochul’s office said.

The move arrives after cameras were already installed in all of the system’s 472 stations, and follows several highly publicized transit crimes – including a mass shooting on a Brooklyn subway car last April, and the fatal shooting of a Goldman Sachs employee in May.

Both incidents occurred on camera-less subway cars, with the April incident transpiring on a train whose cameras had been out of order.

Addressing the media Tuesday in Corona, Hochul said the long anticipated overhaul would address such oversights, while putting to bed concerns of excessive surveillance aired by some privacy advocates.

Security cameras will soon be installed in every single one of New York’s 6,400 subway cars, the city has announced – a $5.5milllion project designed to quash a pandemic surge in transit crime

Speaking at a news conference in Queens Tuesday, Governor Kathy Hochul, a Democrat, unveiled the effort – as ridership continues to dwindle below pre-pandemic levels

‘You’re going to be caught if you conduct any activity, whether it’s an aggressive act or whether it’s a violent crime,’ the governor said Tuesday upon announcing the plan.

‘You think Big Brother is watching you on the subways? You’re absolutely right — that is our intent,’ Hochul added. ‘That is going to give people great peace of mind.’

Hochul, who replaced disgraced Democrat Andrew Cuomo in August, said the city now intend to send the message that surveillance will now be present on all parts of the expansive New York subway to give those scared by crime ‘peace of mind.’

‘If you’re concerned about this,’ Hochul added, addressing potential privacy concerns, ‘the best answer is don’t commit any crimes on the subway.’

Meanwhile, transit crime has climbed 45 percent this year through September 11, the NYPD says – with a series of headline-grabbing crimes this year emboldening commuters’ fears.

In April, 62-year-old gunman Frank unleashed a hail of 33 bullets on an inbound N train in Sunset Park, Brooklyn, shooting 10 people and then successfully evading authorities by making his escape using the subway system.

At the time, the MTA’s system failed to record footage from cameras on the platform, and cameras on the car where the shooting occurred had malfunctioned.

The suspect was subsequently able to his escape from a smoke-filled train, after deploying gas canisters and donning a mask in the mayhem.

Security camera footage was crucial in helping investigators identify the suspect, however, who used another train to escape, before he was tracked down days later on the streets of Manhattan.

In April, 62-year-old gunman Frank unleashed a hail of 33 bullets on an inbound N train in Sunset Park, Brooklyn, shooting 10 people and then successfully evading authorities by making his escape using the subway . The MTA’s system failed to record footage from cameras on the platform, and cameras on the car where the shooting occurred had malfunctioned

Like most security cameras now found throughout New York City, the ones being installed in subway cars won’t be monitored live.

But Hochul said they would still be valuable as a deterrent, since people will know they are being recorded, and that the footage could be valuable to investigators trying to solve crimes.

Even now, police routinely use footage from privately owned cameras mounted on buildings to document a suspect’s movements after a crime – though they often lose the trail if someone gets on a train.

The MTA received about $5.5 million in state and federal funding to purchase and install the cameras. About 200 cameras will be installed each month, with the project wrapping sometime in 2025.

Fears for the safety of New Yorkers using the subway was raised further following the Brooklyn shooting, when Adams admitted the cameras that would have captured the shooting were not working.

The Mayor said a ‘malfunction’ was the reason for the failing to capture any footage of the suspect across three subways.

The MTA said last fall it had installed security cameras in all 472 subway stations citywide, saying they would put criminals on an ‘express track to justice’.

Mayor Eric Adams said a ‘malfunction’ was the reason for the security cameras failing to capture any footage of the suspect, who remains at large, despite his promise to crack down on subway crime in the city

But they were not working at three stations where police went to look for evidence, Chief of Detectives James Essig admitted yesterday.

MTA system chief Janno Lieber said he did not know why the cameras malfunctioned.

But he insisted police had ‘a lot of different options’ from cameras elsewhere on the subway line to get a glimpse of the shooter.

The malfunction put police on the back foot from the start in capturing the suspect, who was still on the run.

the decision to install cameras on subway cars worries some privacy advocates, who say it will increase the level of surveillance of New Yorkers without necessarily making the subway safer. Subway stations in the city already have surveillance cameras.

‘Living in a sweeping surveillance state shouldn´t be the price we pay to be safe. Real public safety comes from investing in our communities, not from omnipresent government surveillance,’ he said in a statement.

New York City´s subway system already has more than 10,000 existing security cameras in its 472 stations that have played a role in solving major crimes – however, as seen in April after the shooting on .

Before the COVID-19 pandemic, New York City’s subway system had largely shaken its 1980s reputation as being filthy and crime-ridden, though complaints about overcrowding and reliability persisted. But after the pandemic emptied the system of riders, many New Yorkers began feeling unsafe underground again.

In an MTA survey of riders released this week, nearly 70% said there were too few police officers in the subway system; barely more than 50% said they felt safe or very safe in stations and on trains.

Hochul´s Republican opponent in the governor´s race, U.S. Rep. Lee Zeldin, has assailed her during his campaign of being too soft on crime.

Ridership on the subway system remains down over its pre-pandemic peak, but passengers have been returning in greater numbers recently, with some days exceeding more than 70% of the volume before COVID-19 struck.

So far this year, the number of crimes reported on public transit in the city is averaging slightly below the levels before the pandemic.

In April, a gunman unleashed a hail of 33 bullets on an inbound N train in Sunset Park, Brooklyn, wounding 10 and underscoring the sense of growing danger on the system.

including the rape of a tourist on a subway platform this month;

will allow for the installation of two cameras in each of the city’s 6,355 subway cars, including those servicing the Staten Island Railway.

said the cameras would make riders more confident in the safety of the transit system.

as officials work to rebuild riders’ faith in the system’s safety.

which are already ubiquitous on New York’s streets,

The Metropolitan Transportation Authority plans to put two cameras in each train car in a project expected to take three years to complete, Gov. Kathy Hochul said Tuesday as she announced the effort at a rail yard in Queens.