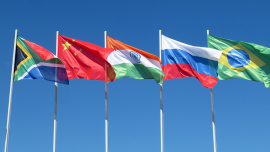 The BRICS Ministers of Foreign Affairs and International Relations have expressed concern on the increasing and ongoing conflicts in many parts of the world.

“They reiterated the need for full respect of international humanitarian law and the provision of humanitarian aid by the basic principles of humanity, neutrality, impartiality and independence established in UNGA resolution 46/182,” the Ministers’ statement read.

The press statement released on Thursday follows the meeting on the margins of the 77th Session of the United Nations General Assembly (UNGA77) in New York, led by South Africa in its capacity as the incoming BRICS Chair for 2023.

The BRICS alliance consists of Brazil, Russia, India, China and South Africa – five major emerging economies with over three billion people that account for over 40% of the world’s population and over a quarter of the global gross domestic product.

The Ministers recalled their national positions concerning the situation in Ukraine, as expressed at the appropriate forums, namely the United Nations Security Council (UNSC) and UNGA.

“The Ministers committed to respecting the sovereignty and territorial integrity of all States and stressed their commitment to the peaceful resolution of differences and disputes between countries through dialogue and consultation, and supported all efforts conducive to the peaceful settlement of crises.”

Terrorism
The BRICS leaders also condemned all forms of terrorism and recognised the threat emanating from terrorism, extremism and radicalisation.

“They reiterated that terrorism should not be associated with any religion, nationality, civilisation or ethnic group,” the statement read.
The Ministers emphasised that States have the primary responsibility in combating terrorism, with the UN continuing to play a central and coordinating role in this area.

Vaccines
They also reiterated the need for equitable distribution of vaccines and speedy vaccination to fill the immunisation gap globally.

“It is imperative to ensure access to safe, quality, effective and affordable medical countermeasures, including vaccines, diagnostics, therapeutics and essential medical products to people from all countries, especially from developing countries and the least developed.”

The leaders said they back the leading role of the World Health Organisation (WHO) in combating the COVID-19 pandemic and acknowledged initiatives such as the ACT-Accelerator and its COVAX Facility.

They acknowledged the Agreement on Trade-Related Aspects of Intellectual Property Rights and the decision to discuss, within six months, its extension to cover the production and supply of COVID-19 diagnostics and therapeutics.

They also stressed the need to continue to strengthen the cooperation of the research on the efficacy and safety of vaccines in light of new variants of COVID-19.

The Ministers also addressed the new and emerging issues affecting “personnel” movements, through and recognition of the national document of vaccination against COVID-19 and respective testing, for the purpose of international travel.

“They called on all countries, international agencies and philanthropic organisations to procure vaccines and boosters from manufacturers in emerging markets and developing countries, including BRICS countries, to ensure that the manufacturing capabilities being developed are sustained.”

The Ministers also underscored the importance of promoting technology transfer.

“Collaborative models of research and development should be pursued to build stronger and sustainable partnerships among countries to make the fruits of research and innovation accessible to the wider global population.”

Trade
The Ministers reaffirmed their commitment to multilateralism and the multilateral trading system with the World Trade Organisation (WTO) at its core.

“They reiterated the strong and necessary need to strengthen and reform the multilateral system, including the UN, the WTO, the International Monetary Fund, and other international organisations.”

They further reiterated their commitment to strengthen the multilateral trading system of the WTO, which is consensus and rules-based, transparent, non-discriminatory, open, free and inclusive with special and differential treatment for developing countries.

“They urged all States to refrain from promulgating and applying any economic, financial or trade measures not by the rules of the WTO, international law and the UN Charter that impede the full achievement of economic and social development, particularly in developing countries.”