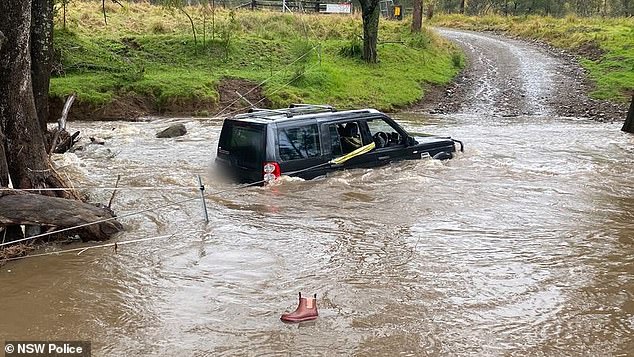 Two adults and a four-year-old boy were rescued from raging floodwaters by a lone police officer in a daring, solo rescue effort.

Thursday in Bingleburra, 80 kilometers north of Newcastle, Senior Constable Richard Hansen rescued three people from a submerged 4×4 on a causeway.

As severe wet weather wrecked havoc on the region, he shot footage of the heroic rescue with a body-worn camera he had fastened to the bullbar of his car.

Five metres from dry land, the trio’s vehicle got submerged before the “wonderful, country cop” waded into the rising water to save them.

The 20-year veteran entered the flooded causeway with a safety line and pulls the child to safety from a window.

Then, he returned to a 51-year-old woman who was clinging to the outside of the vehicle while her foot was trapped behind a rock.

When he liberated her, she informed the officer that a 44-year-old woman with a pre-existing injury was in the vehicle.

The trio’s vehicle (pictured) became submerged on a causeway in the Hunter district of New South Wales amid severe weather before the “great, country cop” rescued them.

Detective Superintendent Wayne Humphrey informed the reporters that had Senior Constable Hansen not intervened, the scenario could have had a very different ending (pictured, the officer guiding the boy to safety on Thursday)

Before assisting the other woman to safety, he secured the submerged vehicle with a winch linked to his police car.

The three were treated for shock but were otherwise unharmed by the incident.

The courageous senior officer stated that it was essential for him to maintain composure throughout the three-step rescue.

This year, he participated in two deployments to Lismore, which was experiencing terrible floods.

If the police had not intervened, Detective Superintendent Wayne Humphrey told the reporters, his message would have been very different.

The senior constable responded to the incident as the region was being pounded by strong rainfall and storms, and flood warnings were in effect.

Detective Sup Humphrey stated, “He’s humble, he’s a good rural cop, and he saved the lives of those three people.”

The rescue occurred as a major storm threatening to wreak havoc on flood-ravaged towns along Australia’s east coast.

The rain has already subsided, but the area’s rivers continue to rise.

The 20-year police veteran (seen during the rescue) stated that it was crucial for him to maintain his composure while he paced through the three-step rescue procedure.

A minor to moderate flood warning has been issued for the Wilsons River near Lismore, which has already been affected by two flood events this year.

The NSW Minister for Emergency Services, Steph Cooke, issued a flood season warning on Thursday, stating that it marked the beginning of a “very lengthy season.”

She stated, “We are facing problems on numerous fronts due to extended floods in the west and north-west of New South Wales and fresh river increases in the Central West and southern areas of the state.”

Flood-weary towns in the Northern Rivers, mid-North Coast, and North Coast face an uncertain couple of days due to deteriorating weather conditions.