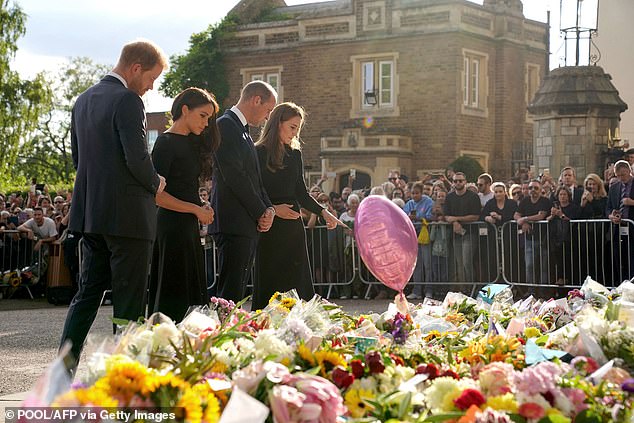 Ben Fordham has warned that feuds within the Royal Family could intensify in the wake of the Queen’s death at Balmoral Castle last week at the age of 96, ending her 70-year reign.

Saturday at Windsor Castle, Prince William and Prince Harry made a rare public appearance with their wives Kate Middleton and Meghan Markle, putting bitter rivalries aside.

While Fordham applauded the princes for presenting a united front, he voiced great disappointment that their late grandmother, who had hoped to see the boys reconcile, would never have seen it.

He urged royal enthusiasts to brace themselves for even more turmoil now that the Queen is gone.

Fordham says that the princes have no choice except to mend their strained relationship, but he is concerned that things could grow worse before they improve.

Princes Harry and William set aside their continuing quarrel to present a unified front at Windsor Castle in the wake of their grandmother’s death.

Fordham remarked, “If you think you’ve seen some drama in the past several years, brace yourself.”

If this tragedy does not act as a wake-up call, the war between William and Harry will regrettably escalate now that the Queen is gone.

It was the first time the brothers had rejoined in almost a year, when they unveiled a statue of their late mother Princess Diana in July of last year.

Fordham lamented that it took the death of their grandmother for the ‘obstinate’ princes to put aside their disputes, and he criticized them for not doing so sooner.

After her husband, the Duke of Edinburgh, passed away about 18 months ago, the Queen fervently wished for their reunion.

Fordham fumed, “Why not before? It was too late, way too late!”

“You have spent years waging war. You both owed it to your grandma to end it, but you did not.

You failed to alleviate one of your grandmother’s greatest heartaches. She wanted the two of you to achieve peace, but you failed to do so.

Only after her death did the two of you get together.

Ben Fordham (shown with wife Jodi) criticized Princes Harry and William for failing to resolve their rivalry while their grandmother was still living.

Fordham added that their father, King Charles III, had failed to interfere by ordering his sons to end their rivalry for the sake of their grandmother.

He stated, “Charles was too weak to act, and the boys were too obstinate.”

The individual who desired to see William and Harry together the most did not.

Fordham feels the princes are unlikely to reunite as long as Harry is married to Meghan and criticized her role in her husband’s isolation from the royal family over the past few years.

Meghan has made it her mission to undermine the monarchy and seek vengeance against members of the royal family, he continued.

Harry is hardly an innocent bystander, as he has occasionally led the attack and planned the effort.

Harry is alienated from his family, while Meghan is separated from hers. They appear to be in competition, so perhaps they deserve each other.

The broadcaster is concerned that relations within the royal family will worsen following the death of the Queen last week.

The Prince of Wales and Prince Harry set aside their personal animosity on Saturday to present a united face following the death of the Queen.

While he understands Harry’s decision to leave the royal family, Fordham says the prince needs to undertake some serious soul-searching.

He pleaded with both William and Harry to agree to disagree and urged them to mend their strained friendship.

Fordham stated, “Without the Queen, the royal family loses its stable underpinnings, and further fractures will only cause greater damage.”

‘The young royals are The Firm’s future, thus a great deal lies on William and Harry’s shoulders. They must restore and heal their connection and reset it.

They must concentrate on what unites them rather than what divides them. And all kids have to do for that is look at their granny.’

Since she died away late last week, the person who truly matters missed out on seeing the two of them seemingly patch up their relationship with the rest of the world.

Ben Fordham is concerned that tensions within “the Fab Four” (pictured) could worsen before they are resolved.