Holly Parker, an adult film star, is said to have died at the age of 30.
Brooke Zanell, a friend of Parker’s, paid tribute to the adult film star on Twitter.
‘It is with deepest grief and devastation that I, her sister, inform you the world,’ Zanell said alongside a series of photographs of the two together.
… yesterday we lost @TheHollyParker. ‘
My right-hand man, the bread to my butter, my singing partner, my travel companion, my baby sister has left this 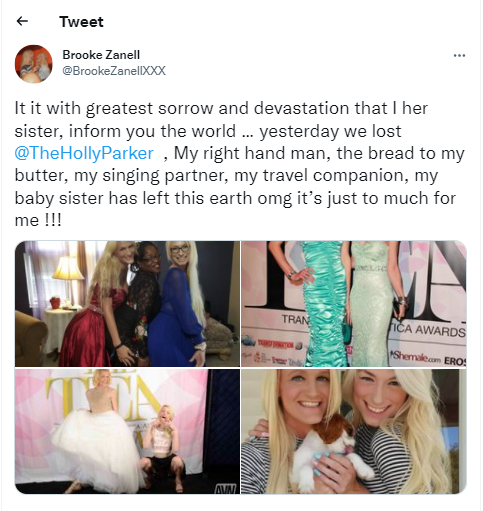 \
Parker had starred in 30 adult films between 2014 and 2018 and had over 160,000 followers on Twitter.
Her cause of death has yet to be confirmed.
Friend Britney Love added: ‘HEARTBROKEN isn’t even close to how I feel I am completely devastated with The loss Of not only my friend my family my sister.
‘Rest in paradise sweet Queen. love you always and forever.’
Holly starred on GroobyGirls.com in 2014 and appeared in adult films including Jay Sin’s TS Playground17 for Evil Angel.
She had focused on working with CX WOW, Devil’s Film, and Jay Sin Videos.
The American star, who lived in Indiana, USA, was also a content creator on OnlyFans.