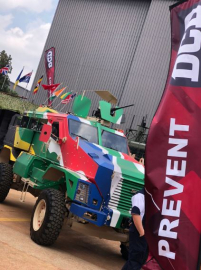 At the Waterkloof Air Force Base in Tshwane, the much anticipated Africa Aerospace and Defence Exhibition (AAD) exhibition has officially begun.

The biggest defence and aerospace show in Africa, which runs from September 21 to 25, was formally launched on Wednesday by Thandi Modise, Minister of Defense and Military Veterans.

The twice-yearly show is back after a lengthy hiatus brought on by the COVID-19 epidemic.

The expo, according to Modise, would highlight the capabilities of the armed services from South Africa and overseas via the exposition and air show.
Three trade days and two air show days make up the format. The air show days will include indoor and outdoor exhibits, a hospitality chalet line, a static aircraft park, and capabilities demonstrations and displays.

The Minister said that “over the years, AAD has come to stand for South African quality, world-class capabilities, and, of course, our remarkable warmth and hospitality.”

She has said that AAD is a significant occasion with a long history that dates back more than 20 years.

In fact, the history of AAD is one of devotion to quality, hard effort, and dedication.

AAD partners have regularly put on some of the top exhibits and air shows in the world, Modise acknowledged.

According to information I’ve received, AAD is among the top six defence exhibits in the world in terms of size, scope, and significance.

Modise said the exhibition benefits South Africa by helping to create jobs and the fiscus before turning her attention to the country’s economy.

She said that the 2018 instalment brought approximately R160 million in tax money. Modise anticipates that this year’s performance will surpass their goal.

The greatest meeting of decision-makers and purchasers from the global aerospace and defence sector, including many from Africa, will convene for the 11th edition of AAD.

According to Modise, the defence sector is crucial in helping the South African National Defence Force (SANDF) fulfil its constitutional duties of preserving the country’s sovereignty and territorial integrity and providing for national security.

“The SANDF contributes to the creation of an environment that is conducive to economic growth and development by providing security and stability. We are also promoting peace, stability, and development on our continent via our peacekeeping deployments.

She said that Turkey was the largest exhibitor this year, with 25 enterprises taking part in the pavilion.

While the general public is able to see the amazing exhibition of the air force and aviation industry, exhibitors and trade visitors will also have the chance to engage directly with different stakeholders.

AAD 2022 will also include two small, medium, and micro enterprises (SMMEs) pavilions, each of which will house 15 businesses. These pavilions will be sponsored by the Department of Trade and Industry and Competition and the Gauteng Growth and Development Agency.

This is in line with our belief that small enterprises are a driving force behind our nation’s much-needed economic growth and long-term development.

“These students will be on their first flights, which will be an exciting experience. They will subsequently be escorted by personnel of our own South African Air Force who will go to Air Force Waterkloof on the Gautrain, according to Modise.

The students will also be introduced to drone technology powered by artificial intelligence that was created by Wits University School of Engineering students.