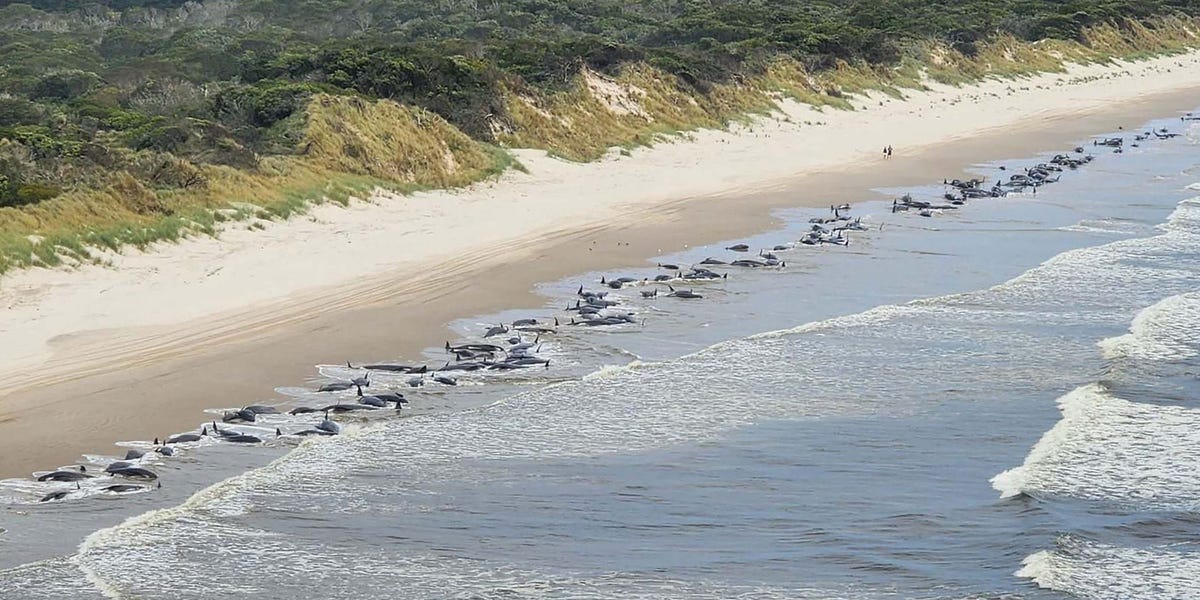 On Wednesday, the west coast of Tasmania in Australia was discovered to be stranded with over 230 pilot whales. About 200 of the stranded whales have perished despite the efforts of marine conservationists to save them.

In an interview with Insider on September 22, Brandon Clarke, a spokesperson of the department of natural resources and environment, stated, “We’ve picked those creatures with the highest chance of survival.” Clarke noted that just 35 whales made it through the stranding.

The number of whales extending out along the beach and barely submerged in water in a picture shot on September 21 and posted by Tasmania’s department of natural resources and environment demonstrates the severity of the situation.

According to a government news release, the majority of the whales were stranded on Ocean Beach, but several whales were also found on a sand flat within Macquarie Harbour.

When animals were still living, Clarke says, “we kept them comfortable and supplied them with whatever shade we could.” The whales that live along Tasmania’s west coast, he said, had been “taken a toll” from the waves “out there at Ocean Beach.”

The tragedy occurs two years after the worst whale stranding in Australia’s recorded history. Over 350 of the 470 pilot whales that were stranded on Tasmania’s west coast in 2020 perished, according to Reuters, which cited local authorities. A total of 111 whales were saved.

Clarke said of the large stranding on Wednesday, “Unfortunately we do have a high death rate in this particular stranding, mostly owing to the exposed circumstances out on Ocean Beach,” adding that in the 2020 event, the whales were stranded in “sheltered waters.”

Although the cause of numerous strandings on Tasmania’s west coast has not yet been identified, wildlife biologist Vanessa Pirotta thinks it may be ecological in origin.

Pirotta, a specialist in marine mammals, told the Associated Press that “the fact that we’ve seen similar species, the same time, in the same position, recurrent in terms of stranding at that same site would offer some type of signal that there might be something environmental here.”

According to Pirotta in an interview with The New York Times, mass stranding may also happen when a pod of whales is “directed astray by a sick individual” or just “startedled by something in the water.”

14 sperm whales were discovered dead on King Island in Tasmania a day before the major stranding, according to the AP, which cited local authorities. According to the story, Australian wildlife officials are looking into what killed the whales.