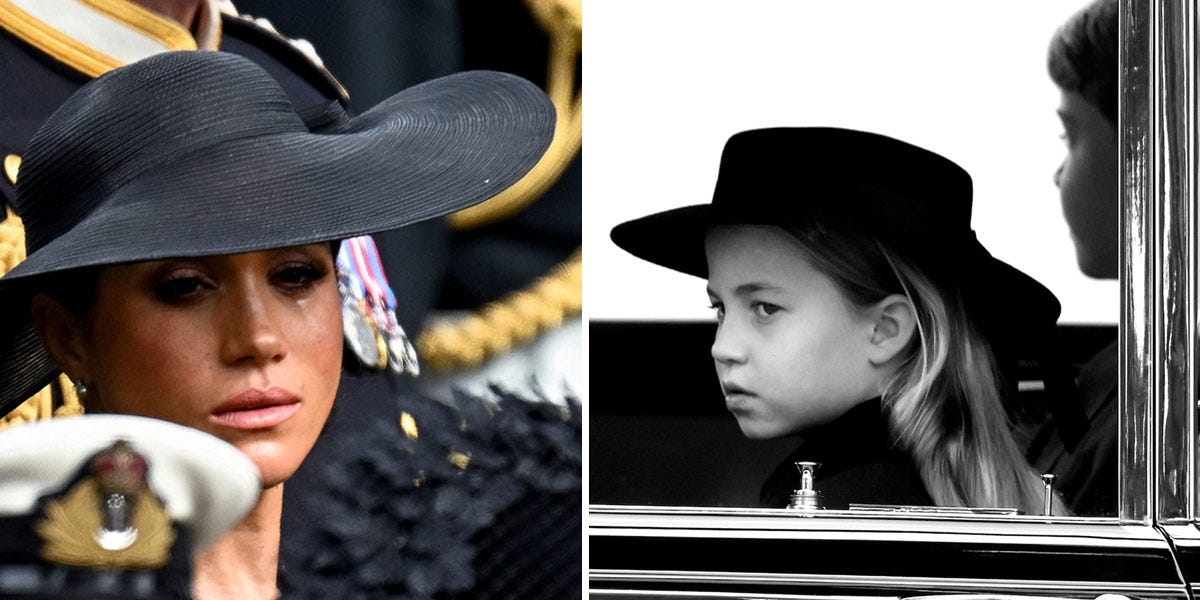 Princess Charlotte was at her brother Prince George’s side as they arrived at the funeral.

The siblings’ younger brother, Prince Louis, did not attend the funeral.

Prince William rode with his father, King Charles III, to the funeral.

The new king and his heir to the throne sat side by side. The photo captures the future of the British monarchy.

While Kate sat next to Camilla, Queen Consort.

Kate and Camilla both wore jewelry gifted to them by the Queen for the funeral.

Photographers captured Prince Harry and Prince William together as they followed the hearse with their grandmother’s coffin.

The reportedly estranged brothers have been reunited throughout the last week following the Queen’s death.

A striking photo captured the moment Prince Harry was not permitted to salute his grandmother’s coffin.

Prince Harry wasn’t able to salute alongside his family because he was stripped of his military titles when he stepped back from royal duties in the spring of 2020, according to Hello! Magazine.

Meghan Markle reunited with Kate Middleton before the funeral began on Monday.

Meghan rode to the funeral with Sophie, the Countess of Wessex, but she stood side by side with Kate and her children, Prince George and Princess Charlotte, upon her arrival at Westminster Abbey.

It marked the first time Meghan was seen publicly with her niece and nephew since she and Prince Harry stepped back from the royal family in 2020.

King Charles III left a note for his mother on her coffin.

The note read: “In loving and devoted memory. Charles R.”

According to a tweet from the Royal Family’s official account, King Charles also selected the flowers for the wreath on his mother’s coffin.

Prince Harry and Meghan shared a special moment as they exited the funeral.

Prince Harry briefly took his wife’s hand as they walked out of Westminster Abbey.

Kate, Camilla, and Meghan stood alongside each other as their husbands walked behind the Queen’s coffin.

They were joined by Prince George and Princess Charlotte.

Meghan was seen crying during the Queen’s funeral.

A photograph captured Meghan tearing up during the service.

Kate comforted her seven-year-old daughter as Princess Charlotte began crying while the Queen’s casket was transferred from a carriage to a hearse at Wellington Arch.

The pair were photographed walking together with Princess Anne’s husband, Vice Admiral Timothy Laurence, on Monday.

The Queen’s royal corgis waited for the funeral procession.

The Queen’s beloved corgis, Muick and Sandy, were waiting outside Windsor Castle when her coffin arrived.

King Charles took part in the committal service, which signified the end of the Queen’s reign.

King Charles III placed the Queen’s company camp color of the Grenadier Guards flag on the coffin before the Lord Chamberlain Baron Parker “broke” his wand of office. He placed it on top to signal the end of the guards’ service to the Queen.