Skip to content
Home » News » 10 foreign prisoners of war from the US and the UK who were held hostage in Ukraine have been released by Russia. 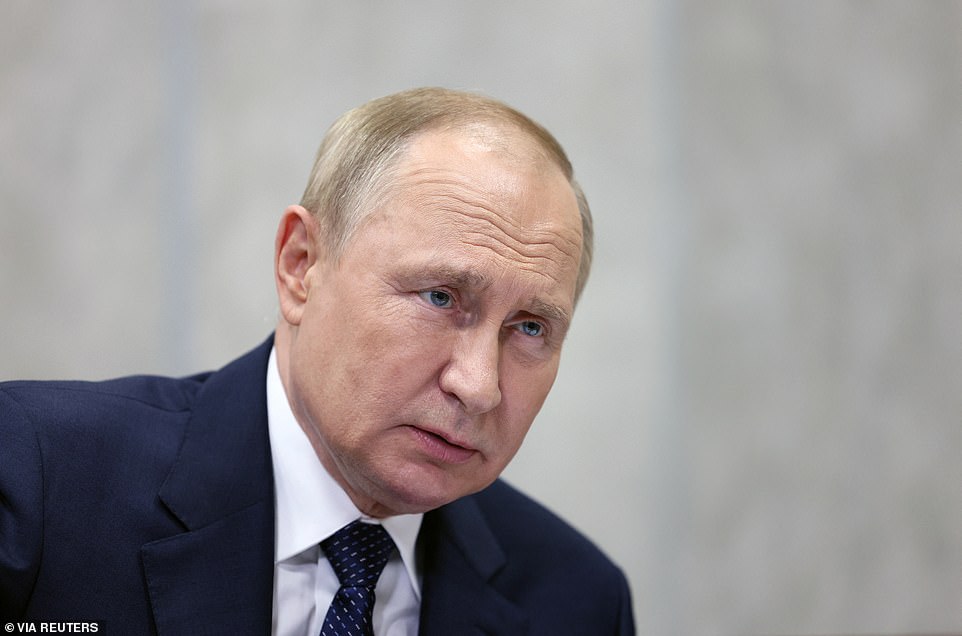 ‘I am just so relieved that my brother and the others will be home tomorrow,’ said Cassandra Pinner, Shaun’s sister, speaking with MailOnline. ‘It has been hell for everybody but at last the worrying can stop for us.

‘We must not forget all that is still happening in Ukraine, but for now our families can celebrate that our boys are home!’

Two US military veterans — Alexander Drueke, 39, and Andy Huynh, 27 — were also both freed thanks to the prisoner exchange.

The plane carrying the prisoners left Russia earlier today and landed in the Saudi capital Riyadh this afternoon.

They will soon be returned to their home countries, the Saudi Press Agency reported, citing sources familiar with the mediation.

UK Prime Minister Liz Truss said: ‘Hugely welcome news that five British nationals held by Russian-backed proxies in eastern Ukraine are being safely returned, ending months of uncertainty and suffering for them and their families.’

The prisoner exchange came at a puzzling time, landing on the same day Vladimir Putin ordered the mobilisation of reservists in a dramatic escalation of the war in Ukraine.

Putin also threatened the West with nuclear weapons over Ukraine, after he announced plans to annex occupied parts of its territory to the Russian mainland.

POWs held in Russia, some of which were sentenced to death after fighting in eastern Ukraine, have been released following mediation by Saudi Arabia

The list of prisoners released includes five British nationals, two Americans, one Swede, one Croat and one Moroccan

Shaun Pinner (left) and Aiden Aslin (right), who had been serving in the Ukrainian marines, were captured by Putin’s troops in the city of Mariupol in April. It is not clear whether Shaun Pinner is among those who have been released

Shaun Pinner (left), released alongside nine other POWs, is believed to have been flow in Riyadh as part of the exchange

The two Americans were freed thanks to a prisoner exchange brokered by Saudi leader Prince Mohammed bin Salman (pictured, right, with Joe Biden in Jeddah in July)

The prisoners were captured on the frontlines in Ukraine’s eastern Donbas region.

Truss thanked Ukrainian president Volodymyr Zelensky ‘for his efforts to secure the release of detainees, and Saudi Arabia for their assistance’.

‘Russia must end the ruthless exploitation of prisoners of war and civilian detainees for political ends,’ Ms Truss added.

A former care worker, Mr Aslin moved to Ukraine after falling for his now-wife Diane, who is originally from the city of Mykolaiv. He and his brother were captured after fighting in the city of Mariupol in April.

The UK’s Foreign Secretary James Cleverly said: ‘I welcome the safe return of Ukrainian prisoners of war and one civilian, including five British nationals. Prisoners of war from other countries held by Russia-backed proxies have also been returned.

‘This brings to an end many months of uncertainty and suffering, including the threat of the death penalty, for them and their families, at the hands of Russia.’

Tragically that was not the case for one of those detained, he said, recalling the family of Paul Urey — who died while in captivity.

Ukraine’s foreign minister Dmytro Kuleba announced in July that Russians had returned Mr Urey’s body to the nation after he died in detention having suffered ‘illnesses’ and ‘stress.

But the corpse revealed signs of torture and was missing body parts, Ukrainian officials said. He had been in held captivity by separatists in the Donetsk region.

‘I would like to express my gratitude to President Zelensky and his team for their efforts to secure their release, and to HRH Crown Prince of Saudi Arabia, Mohammed bin Salman and his team, for their assistance,’ Cleverly added.

‘I continue to call on Russia to comply with International Humanitarian Law and not exploit prisoners of war and civilian detainees for political purposes.’

Drueke and Huynh were believed to be the first US citizens confirmed captured by Russia’s forces in eastern Ukraine when they were reported missing in mid-June.

At the time, Huynh’s fiance, Joy Black, told Reuters the men had been motivated to support Kyiv in its fight against Russia after watching television footage from Ukraine in the first weeks after Russia invaded.

Drueke, 39, left, and Andy Huynh, 27, appeared terrified in footage released by Russian forces where they identified themselves and denounced war. They men went missing in June after their platoon in Ukraine was ambushed by Russian soldiers

Large numbers of foreigners have travelled to Ukraine to fight since Russia’s February 24 invasion. Some of them have been caught by Russian forces, along with other foreigners in the country who say they were not fighters.

It could not be immediately established if the released group included Britons Shaun Pinner and Morocco-born Brahim Saadoun who were also captured and sentenced to death in Donetsk.

A Swedish citizen, captured at the port city of Mariupol and facing a possible death sentence under the laws of the DPR, was among those released, Swedish Foreign Minister Ann Linde confirmed.

‘I can confirm that the Swede who in May was taken into custody by Russian forces is free and on his way to Sweden,’ Linde told Swedish news agency TT on the sidelines of the United Nations General Assembly in New York.

MbS reportedly made the initial offer to mediate during a telephone call with Putin back in March, during the early stage of the war.

It is not yet clear how many prisoners were returned to Russia, or why Saudi Arabia intervened on the day Putin decided to declare partial mobilisation.

Alexander Drueke, left, and Andy Huynh, right, have both been freed after they were captured by Russia while fighting in Ukraine. The US military veterans’ freedom was arranged in a deal brokered by Saudi Arabia

‘The release comes based on the priority given by Crown Prince Mohammad bin Salman, and in continuation of his commitment to the humanitarian initiatives towards the Russian-Ukrainian crisis,’ a statement from the Saudi ministry of foreign affairs read.

‘This also results from his continued engagement with the relevant countries.’

In the conversation back in March, MbS also reaffirmed Saudi intention to maintain the balance and stability of the oil market and abide by agreements from OPEC — an intergovernmental body that regulates global oil prices.

OPEC+ announced it would boost production by 100,000 barrels a day in August, barely making a dent in meeting global demand — after observers claimed the Biden administration was asking Saudi Arabia to increase oil production and reduce global energy prices.

The move came weeks after Biden visited Saudi Arabia, giving a boost to the ruling family and the Crown Prince.

Saudi Arabia and most of the Arab countries are the world’s biggest oil exporters, along with Russia, which together make up OPEC+.

Both Russia and Saudi Arabia have an interest in keeping world oil production stable despite soaring prices due to the invasion of Ukraine — forcing the two countries to collaborate and putting the crown price in a position to negotiate with Putin on other matters.

Both Ukrainian and Russian forces have captured hundreds of enemy fighters since the start of the conflict, with a handful of prisoner exchanges having taken place.

The head of the UN human rights mission in Ukraine said earlier this month that Russia was not allowing access to prisoners of war, adding the UN had evidence that some had been subjected to torture and ill-treatment that could amount to war crimes.

Russia denies torture or other forms of maltreatment of POWs.

After Putin announced mobilisation, all plane tickets to countries where Russians would not need a visa, including Turkey, Armenia and Georgia, have now sold out, while flagship airline Aeroflot is not displaying any available flights.

More than 100 demonstrators holding ‘no to mobilisation’ signs and chanting anti-war slogans have been dragged away by armed police trying to stamp out the unrest across the country, while others desperately try to flee the country by snapping up one-way tickets from Moscow.

Some alleged people already had been turned back from Russia’s land border with Georgia and that the website of the state Russian railway company collapsed because too many people were checking for ways out of the country.

Putin’s apocalyptic nuclear warnings have prompted even China to demand a ceasefire ‘through dialogue and consultation’, while Turkey’s Recep Tayyip Erdogan said Putin should return all occupied land, including Crimea, to its ‘rightful owners’.

Meanwhile the US will retaliate with ‘a devastating strike’ if Putin uses nuclear weapons, the United States Army’s former European commander has warned.

Russian Railways and Aeroflot said they hadn’t ‘yet’ been ordered to ban men aged 18 to 65 from boarding.

A group based in Serbia, Russians, Belarussians, Ukrainians and Serbs Together Against War, tweeted that there were no available flights to Belgrade from Russia until mid-October. Flights to Turkey, Georgia or Armenia also sold out, according to the Belgrade-based group.

Alexei Navalny, Russia’s most prominent opposition leader, said Putin was sending more Russians to their deaths for a failing war.

‘It is clear that the criminal war is getting worse, deepening, and Putin is trying to involve as many people as possible in this,’ Navalny said in a video message from jail recorded and published by his lawyers.

‘He wants to smear hundreds of thousands of people in this blood,’ Navalny said.

The tyrant’s announcement, made in an early-morning television address, raised fears that some men of fighting age would not be allowed to leave Russia.

Defence Minister Sergei Shoigu said the call-up would be limited to those with experience as professional soldiers, and that students and those who had only served as conscripts would not be called up.

Nevertheless, the move has raised fears of mass conscription in the worrying escalation of the war.